The Hollywood Temp Diaries has announced the winners of the reality/nonscripted division of the 2009 Bennie Awards, recognizing the worst in primetime TV.

In what can only be seen as a tremendous upset, Jay Leno beat out Jon Gosselin, Spencer Pratt and "Jersey Shore’s" The Situation for Worst Male Personality.

"I’m stunned," said Temp X, the legendary creator of the Hollywood Temp Diaries. "Leno’s behavior in taking back ‘The Tonight Show’ was loathsome and shameful and his show was dreadful, but to say he’s worse than the unwanted Ed Hardy model Jon Gosselin, the irrepressible cheeseball Spencer Pratt or Mr. Abs-on-feet The Situation is nothing less than shocking."

Perhaps foretold by Mr. Leno’s upset, "The Jay Leno Show" triumphed in the Worst Show category over an imposing slate of script-free programming including "The Biggest Loser," "The Hills," "Jersey Shore" and — in a bit of a surprise — the little-known "Sam’s Game," a Playboy TV show featuring "The Simpsons" creator Sam Simon playing poker with C-list celebs.

In the Worst Female Personality, the diminutive Snooki from "Jersey Shore" used her stubby legs and ran away with the title, beat out an equally imposing slate of "celebs" featuring Daisy ("Daisy of Love"), Heidi Montag ("The Hills"), Jillian Michaels ("The Biggest Loser") and Kim Kardashian ("Keeping Up With the Kardashians"). 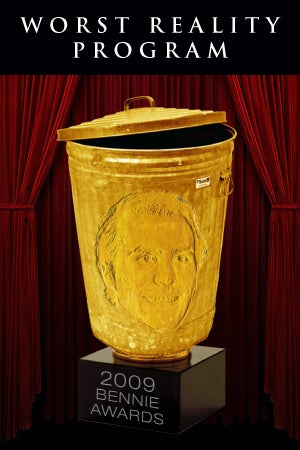 "Snooki was the last nail in the coffin of MTV having anything to do with music," Temp X said. "This vote clearly indicates the public’s disappointment with that decision. Hopefully they’ll right that ship."

The Bennies is the only competition to celebrate television in the same way the Razzies celebrate the silver screen. It pays homage to Hollywood’s king of bad programming decisions, former NBC head Ben Silverman — the architect of the failed Jay Leno primetime experiment as well as the revived "Knight Rider," the remade "Kath & Kim" and countless others.

Over the past month, visitors to the Hollywood Temp Diaries nominated their choices for the coveted Golden Trashcan (at left). Employing "Chicago-style voting," participants could nominate whichever personality and show as many times as they wanted — and nominate they did.

Temp X is a writer, producer and a one-time stand-up comic toiling in underemployment. He is the self-anointed King of Hollywood and the mind behind the wildly popular (or so I'd like to think) blog, http://www.tempdiaries.com. The site chronicles his experiences as a temporary assistant in Hollywood. He makes $16/hr working for a CBS subsidiary, but that assignment ends in a week. He can be reached at tempx@tempdiaries.com.