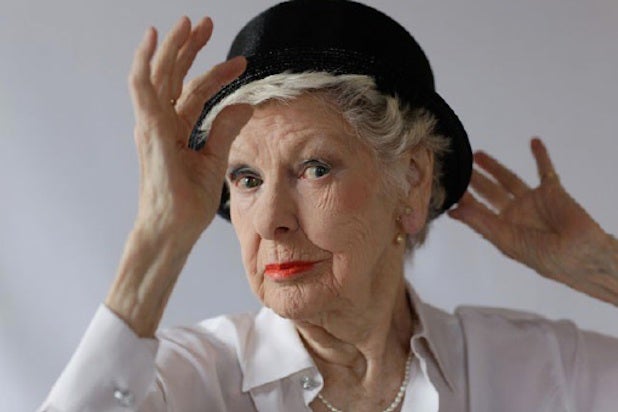 Bernadette Peters, Michael Feinstein, Patti Lupone, Hal Prince and an array of Broadway stars will present a tribute to the late Broadway and cabaret star Elaine Stritch on Nov. 17 at the Al Hirschfeld Theatre, the organizers of “Everybody, Rise! A Celebration of Elaine Stritch” announced on Thursday.

The event comes as director Chiemi Karasawa’s documentary “Elaine Stritch: Shoot Me” lobbies for votes in the Oscar documentary category, and the races for other doc prizes.

Participants in “Everybody, Rise!” include Peters, Feinstein, Lupone, Prince, Betty Buckley, Christine Ebersole and Stritch’s longtime musical director Rob Bowman, all of whom will perform and offer reminiscences of Stritch, whose career onstage began in 1944 and lasted almost until her death last July at the age of 89.

“Elaine Stritch: Shoot Me” is an affectionate, raw and revealing portrait of Stritch, a brutally frank and sharp-tongued woman who gloried in her reputation as a tough, “kooky broad,” as she once called herself in an interview with TheWrap. During her near-70-year career, she won two Emmys and was inducted into the American Theater Hall of Fame.

Also read: Elaine Stritch at Tribeca: ‘Nobody Said Anything About Retiring’

Details about tickets will be made available at a later date, with a limited number of tickets available to the general public on the day of the show. A percentage of the proceeds will go to the Elaine Stritch Scholarship Fund at the Stella Adler Studio of Acting.

“Elaine Stritch: Shoot Me” premiered at the Tribeca Film Festival in 2013, and was released by IFC/Sundance Selects in February 2014.