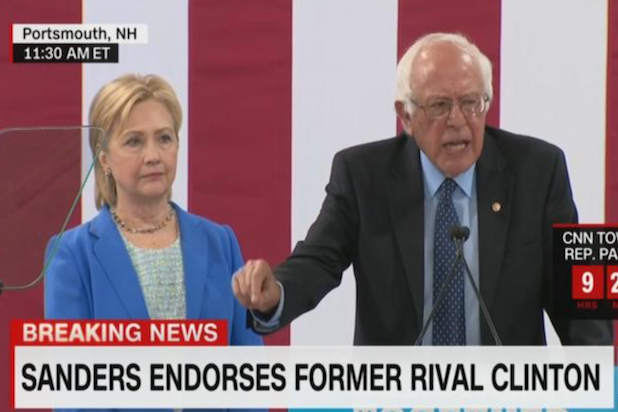 “Together we will continue to fight for a government that represents all of us and not just the one percent,” Sanders said at a joint rally in New Hampshire on Tuesday.

“I have come here to make it as clear as possible to why I am endorsing Hillary Clinton,” Sanders said before calling Clinton “far and away” the best candidate.

“In these stressful times for our country, this election must be about bringing our people together, not dividing us up,” Sanders said.

Sanders said he is supporting Clinton because she is prepared to fight to raise the minimum wage, create jobs, expand access to health care and address climate change, while Donald Trump does not share those values.

Sanders said that Trump would not raise minimum wage and that he would appoint Supreme Court justices that threaten civil liberties and equal rights. He promised that his “political revolution” would continue but acknowledged that Clinton is the Democratic nominee. Sanders thanks President Obama for his leadership but noted that much more needs to be done.

“Too many Americans are being left behind and ignored,” Sanders said.

Within minutes of Sanders’ endorsement of his former rival, presumptive Trump made it clear that he will use comments made during the Democratic primary race against his general election opponent. Sanders “is now officially part of a rigged system,” the Trump campaign said.