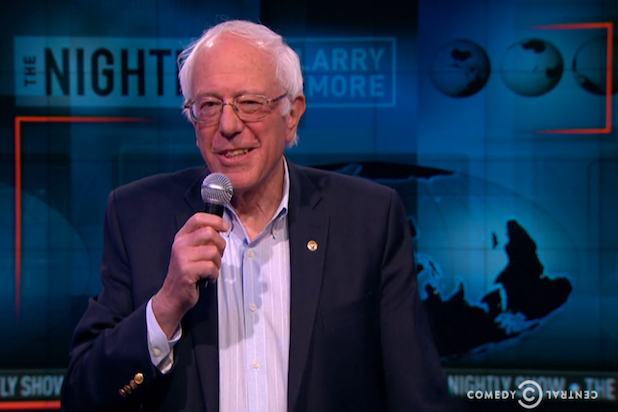 Fighting for every vote in the New York primary, Bernie Sanders stopped by “The Nightly Show with Larry Wilmore” to rip Donald Trump and Ted Cruz on New York values before literally dropping the mic.

He was playing off Ted Cruz’s claim earlier in the campaign that Trump represents liberal “New York values” — an argument that has come back to haunt Cruz as he now seeks New York votes.

Sanders said he values “a living wage for all Americans,” “a justice system that treats everyone fairly” and a government that “works for all of us.” He went on to call New York a place that was built by immigrants before defending his home city and dropping the mic like a rapper in a freestyle battle.

Sanders appeared on Fillmore’s show on Wednesday, the night before he faced off with Democratic opponent Hillary Clinton in a Brooklyn debate. They clashed in that debate over Wall Street, Israel, and Clinton’s judgement.

Both candidates have played up their New York ties. Sanders, as he noted on Willmore’s show, is Brooklyn-born, and Clinton, obviously, is a former New York senator.