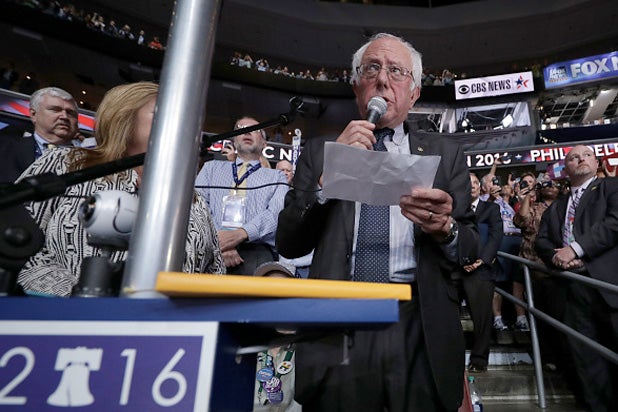 Bernie Sanders couldn’t have endorsed Hillary Clinton any stronger than he did on Tuesday.

Sanders made a dramatic announcement at the Democratic Convention as his home state of Vermont was set to close out the process that awards delegates. Sanders, sitting with the Vermont delegation, announced that he wanted to suspend the roll call and name Clinton the Democratic nominee.

“I move that the convention suspend the procedural rules. I move that all votes cast by delegates be reflected in the official record. And I move that Hillary Clinton be selected as the nominee of the Democratic Party for President of the United States,” Sanders said.

Clinton has already technically clinched the nomination — but the symbolic gesture by Sanders is expected to go a long way when it comes to unifying the party.

Also Read: Philly Feels the Bern: Like It or Not, Bernie Sanders Supports Hillary Clinton

The former candidate also endorsed Clinton when he spoke on the opening night of the convention Monday. While he admitted that he disagrees with Clinton on a number of issues, her ex-rival explained: “that is what democracy is all about.” He also said that by coming together, they have produced the most progressive platform in the party’s history.

The DNC issued a formal apology to Sanders on Monday for leaked emails that suggested the party’s leadership conspired against him during the primaries in favor of presumptive nominee Clinton.

“I understand that many people here in this convention hall and around the country are disappointed about the results of the nominating process … I think it’s fair to say that nobody is more disappointed than I am,” Sanders said.

However, when it comes to now getting Clinton into the White House, “I am going to do all that I can to make that happen,” he vowed. “I am proud to stand with her tonight.”