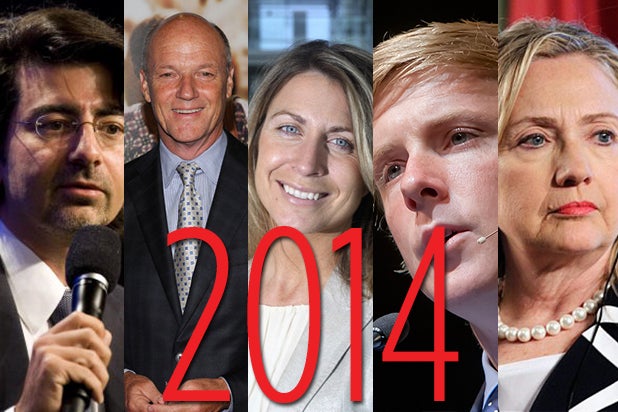 Where there are winners there are also losers, and as TheWrap already declared our our top 5 media winners of 2014 so must follow the year’s most prominent losers.

Fortunately, in the media world, it’s not a challenge to see who is in a funk and who is in full-on demolition mode.

For a guy who had the vision, determination and talent to create eBay, Pierre Omidyar sure seems to have trouble running a media company. Omidyar vowed to drop a cool $250 million on First Look Media, a collection of digital magazines that would reinvent journalism through “teams of data analysts, fact checkers, visual designers and editors” working together with writers, reporters and producers.

Hell, the promotional video promising to provide journalists with such passé resources like time, travel budgets and research assistants gave me goosebumps.

The pitch attracted Rolling Stone’s Matt Taibbi, Gawker’s John Cook, The Guardian’s Glenn Greenwald, The Nation’s Jeremy Scahill, Salon’s Alex Pareene, the result at the end of a year are: three of those boldfaced names are gone, protesting a lack of independnece .

Taibbi bolting First Look was the media stunner of the year. He’d already hired dozens of staffers at The Racket, which was set to be a mix of hard reporting and satirical spoofing and was supposed to launch in the fall.  Billionaire Omidyar clashed with his star editor over everything from hiring authority to seating charts in First Look’s office. Cook followed, and then Taibbi’s Racket was scrapped all together, with nine of the never-launched site’s staffers laid off.

MSNBC’s steep ratings decline in 2014 isn’t the main reason the network joins the uncool kids this year. Stagnation is.

For most of 2014, MSNBC fell into predictable, never-ending loop of the same two to three stories, regurgitated hour after hour. Sure, it works for Fox News — but they can afford to. Conservative audiences tend not to care if they are watching a news loop, as long as it has a pro-Republican, anti-Democrat tinge, they’ll keep watching.

The network, led by President Phil Griffin and directly overseen by NBCUniversal News Group Chairman Pat Fili-Krushel, didn’t seem to have a plan for after the 2012 election (which produced record ratings for the net) other than filling in the gap until the 2014 midterms and then pouncing on the 2016 coverage train.

A network insider who appeared as a guest frequently in 2014 told TheWrap, “The network lurched from one thing to another, trying to find an answer, not listening to viewers who don’t like the new changes — as reflected in the numbers.”

Without the benefit of a ratings-friendly presidential election, most of the network’s primetime offerings in 2014 revolved around favorite liberal punching bags like Senators Ted Cruz and Rand Paul and topics like Hillary Clinton and whether New Jersey Governor Chris Christie had a direct hand in the 2013  George Washington Bridge lane closures.

The latter story actually produced a ratings spike for the network, but the rest didn’t. In fact, the third quarter of 2014 was the network’s lowest rated since 2007 among total day and primetime viewers.

Joining Hayes in the ratings-challenged category has been 27-year-old Ronan Farrow, who premiered in February, but to date hasn’t translated on screen or in the ratings. Farrow’s program was criticized for placing a 27-year-old with over 250,000 Twitter followers at 1pm, a time when younger viewers aren’t watching.

So what’s the network doing? As TheWrap reported, president Phil Griffin has implemented a new strategy of broadening from Washington DC to send talent like Hayes, Maddow, Farrow and the “Morning Joe” team out in the field more for original reports on stories like the coal industry, voting rights and the economy. The network also got into the digital programming game, premiering a daily digital lineup on MSNBC.com called “Shift,” which goes out of its way not to resemble MSNBC TV.

If the network continues tinkering with its topics to offer more variety, fixes some obvious talent issues, and continues innovating digitally, MSNBC has ample opportunity to turn things around.

“The magazine, which is to be a weekly review of current political and social events and a discussion of the theories they involve, is to represent progressive principles, but it is to be independent of any party, or individual in politics.”

The story: Facebook co-founder Chris Hughes bought the historic political magazine in 2012 at age 28, promising to uphold the journalistic ethos that made TNR indispensable.

“Chris laid out a false choice between a profit-making business and complete philanthropy,” former longtime New Republic editor Paul Berman told TheWrap as part of our reporting on the magazine’s demolition.

According to multiple former editors, the TNR mass meltdown was caused by Hughes’ mandate for staff to produce shorter pieces, add more big-picture graphics to stories and to think more digitally than traditionally for stories.

One resigning editor, Julia Ioffe, described it this way:

The narrative you’re going to see Chris and Guy put out there is that I and the rest of my colleagues who quit today were dinosaurs, who think that the Internet is scary and that Buzzfeed is a slur. Don’t believe them. The staff at TNR has always been faithful to the magazine’s founding mission to experiment, and nowhere have I been so encouraged to do so. There was no opposition in the editorial ranks to expanding TNR’s web presence, to innovating digitally.

Hughes says he plans to press forward, having bought TNR to “protect the future of The New Republic by creating a sustainable business so that our journalism, values and voice — the things that make us singular — could survive.” Without an editorial staff, he’ll find it mighty hard to carry out that mission.

NBC News was in the news a lot in 2014, mostly for unwelcome reasons.

It started with the constant public agonies of “Meet the Press” moderator David Gregory, whose ratings were in decline.  NBC News hired a psychological consultant the year before to speak to his wife and friends to “get perspective and insight from people who know him best,” according to NBC. Translation: NBC News had lost faith in Gregory. Tom Brokaw trashed him to the Washington Post, saying: “I won’t get into whether David is the right guy. NBC already said he’s got the job and that’s what counts.”

Throughout, NBC News President Deborah Turness and executives came out vowing Gregory was “our guy.”

Then came the Jamie Horowitz debacle on the “Today” show, also with ratings in decline.

NBCUniversal News Group Chairman Pat Fili-Krushel and NBC News President Deborah Turness moved heaven and earth to snag ESPN executive Horowitz away from Disney/ABC to become the general manager of “Today.” His mandate: to lift the former No. 1 morning show back to its perch atop.

He was a goner 78 days into his NBC News career, fired by Turness for upending the “Today” show culture and making too many enemies.

But for the network to leverage these assets, it needs to get out of its own way in 2015.

5. Too Much, Too Soon: Hillary Clinton

Also Read: Hillary Clinton Reveals She and Bill Were ‘Dead Broke, In Debt’ After Leaving the White House (Video)

In the first interview with Diane Sawyer, Clinton created a media firestorm by suggesting she and former President Clinton were “dead broke.” Cable news seized upon her comments, zeroing in on whether she is “out of touch.” Next up was Clinton’s interview with The Atlantic Magazine, where she criticized the president’s foreign policy decisions in Syria. Instead of being engaged, the former Secretary of State was merely overexposed.

It showed in a recent ABC News/Washington Post poll that showed Clinton’s favorability rating among Democrats down eight points since June. Another new nugget might produce concern for camp Clinton: her June 16 People Magazine cover was the worst selling issue of the year.

Clinton might make her loser selection here mute in two years if she wins the presidency. (I’ll gladly eat my political crow.) But, in 2014, she might have been better off keeping her head down, rarely commenting on policy or social issues, and let an air of mystery and suspense build as to if and when she will run.