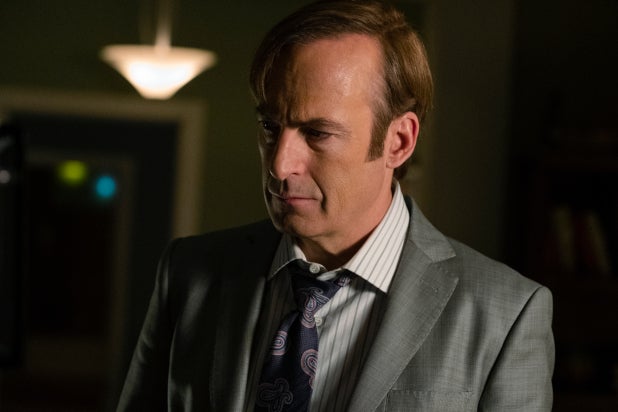 The “Breaking Bad” spinoff wrapped its fourth season on Monday with a moment that viewers had been anticipating ever since we first met Bob Odenkirk’s lovable-but-flawed Jimmy McGill.

“I’m so thankful that everyone stuck with us this long,” Peter Gould, “Better Call Saul’s” co-showrunner tells TheWrap.

After delivering a heartfelt, tearful story about his late brother Chuck (Michael McKean) and winning his appeal to the New Mexico State Bar committee to be reinstated as a lawyer, as they walk out Jimmy does an about-face to Kim (Rhea Seehorn): He was faking the whole thing in an attempt to get a sympathy vote.

“Did you see those suckers? That one a—— was crying,” he excitedly tells Kim, who looks on horror as she is unwittingly witnessing the “birth” of his “Breaking Bad” alter-ego. Upon being reinstated, he asks for a DBA, or “Doing Business As,” form so he can practice law under a different name. And if there was still any doubt what that name would be, the final words of the season made it crystal clear: He’s finally Saul Goodman, Attorney at Law.

“It’s one of those things that emerged, sort of organically, as we broke the season,” Gould said of the four-years-in-the-making moment.

The introduction (or re-introduction) of Saul Goodman was something that took far longer than Gould had anticipated, as it’s well known that he and co-creator Vince Gilligan had originally planned to have Jimmy become Saul at the end of the first season. But the tragic descent of Jimmy into the sleazy lawyer from “Breaking Bad” ending up being too interesting to speed through.

But all throughout the fourth season, it felt like the clock was counting down to midnight on Jimmy. He was already using the “Saul Goodman” moniker when he was selling his cell phones to criminals and in the penultimate episode he laments to Kim that, while he sees those same criminals as potential new business (after all, criminals tend to need lawyers), they only know him under his pseudonym.

“Jimmy has this very specific problem, which is that his former business of doing wills for the elders is closed off to him,” says Gould. “Even when he’s a lawyer again, he’s ruined his reputation, so what kind of law is he going to practice next?”

Gould said that around midseason they figured out how they were going to get Jimmy to that point where he decides it’s more advantageous to him to practice law under a different name. “All season long we’ve been kind of teasing out and going step by step to try and figure out how he comes to the conclusion that he comes to.” And as Gould explains, to Jimmy, it makes perfect sense. “This crazy decision of calling himself Saul Goodman is, in his eyes, logical.”

But Gould teases, is it also a way for Jimmy to put on a mask and shut himself off to anybody that still cares for him?

All throughout “Better Call Saul” the writers have presented Jimmy McGill as this down-on-his-luck screw up, always looking to cut corners, and always failing to earn the respect of Chuck. Despite Jimmy’s insistence to Kim at the end that his statement about his late brother in front of the committee was an act, Gould argues there was probably some truth to those words, where Jimmy talks about his desire to make his big brother proud.

Also Read: 'Better Call Saul': Nacho Is a 'Samurai Without a Master' Stuck Between Fring and the Salamancas (Video)

“He uses the death of his brother to evoke an emotional reaction from the panel to win the day. But, it feels very real,” said Gould. “Has he just become a much better actor? There’s a lot of ways to interpret that [scene].”

Gould said the writers are just starting to plan out the fifth season, which will see Odenkirk have to essentially play two characters.

“The big question for us is what does it mean to be Saul?” he asks. “It’s the Bruce Wayne/Batman question. Which one is the real guy?”

A few “Better Call Saul” faces are familiar, but others are very deep pulls