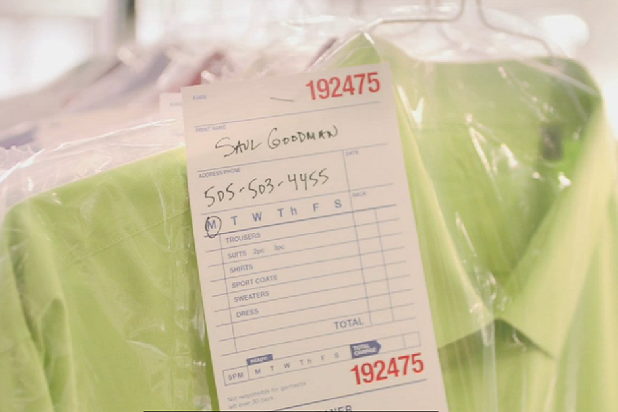 The 30-second clip, dubbed “Clean Shirts, Dirty Lawyer,” doesn’t offer a ton of detail, but it certainly sets a tone. In the clip, a light-green dress shirt is plucked from a dry cleaning carousel and hung on a rack, revealing a tag that identifies the owner of the shirt as none other than ethically flexible attorney Saul Goodman (played by Bob Odenkirk).

Oh, and you’ll definitely want to call the phone number scrawled on the ticket.

The series, from “Breaking Bad” duo Vince Gilligan and Peter Gould, is set six years before Goodman meets Walter White. When we meet him, the man who will become Saul Goodman is known as Jimmy McGill, a small-time lawyer searching for his destiny and hustling to make ends meet.

“Better Call Saul” premieres Sunday, Feb. 8 at 10 p.m. on AMC, with a second episode airing the following night at 10.

Until then, watch the video.