Who ever saw this one coming?
But fresh off her ratings bonanza as the oldest host ever of “Saturday Night Live,” with an MTV Movie Awards nomination in tow and now a surging campaign to host the Oscars – and re-host “SNL” — the resurgence of Betty White couldn’t be at more of a fever pitch. 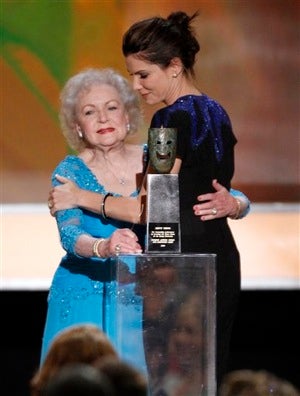 Thank Sandra Bullock.
Indeed, the renewed interest in White started with the release of “The Proposal” last June, which White stole from both Bullock and Ryan Reynolds as the heart-attack-faking Granny Annie. And it was solidified when Bullock presented her the Life Achievement award at the Screen Actors Guild awards in January.
The role also garnered the 88-year old actress, who Bullock has called a “national treasure,” an  MTV Movie Awards “Best WTF” Moment category nomination for her copping a feel of Bullock’s breasts.
WTF is right.
“Betty White is comfort food; she is loved by every demographic,” says veteran PR agent Howard Bragman. “This recent resurgence is a snowball that started with her hilarious appearance on Comedy Central’s roast of William Shatner and ‘The Proposal,’ and just keeps picking up speed and size as it goes on.”
White’s agent Jeff Witjas told TheWrap that he thought the secret to her resurgence was “because she is cool, hip and has a youthful soul!” Tongue firmly planted in cheek, the Agency for the Performing Art rep also added, “plus a great agent.”
Not to mention the way she’s blended a bit of new media meets old, naughty meets nice.
“She’s captured the collective cultural imagination because she feels present,” Jon Chu, director of the upcoming urban dance drama “Step Up 3D,” told TheWrap. “Initially it’s just funny that she says vulgar things about sex and drugs. It’s shocking — but then her timing is spot on! And she seems to look at young people right in the eye and say, ‘I’m right there with you.’” 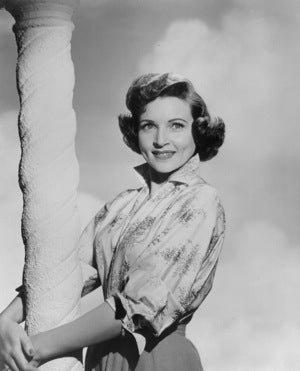 Indeed, a TV staple for over 50 years, White has just as often played naughty as she has nice, leaping from the lascivious Sue Ann Nivens on "Mary Tyler Moore" to the wide-eyed and sweet Rose Nylund on "The Golden Girls."
Just before“The Proposal” came out, White reveled to a new generation just how good she was at the foul-mouthed former in a widely viewed punking of “Proposal” co-star Reynolds that White and Bullock did on Funny or Die.
Certainly the digital generation have been right there with White since earlier this year when the “Betty White to Host SNL (Please?)!” campaign began on Facebook.
Starting out small, the idiosyncratic social media campaign ballooned to over 500,000 Facebook fans after White’s rip-roaring SAG acceptance speech.
“Her remarks at the SAG ceremony certainly resonated with the public,” said Guild President Ken Howard, an old friend of White’s. “She literally brought the house down with truly hilarious, off-the-cuff quips. The television audience saw the real Betty — witty, charming, self-deprecating, definitely ironic. It was a classic moment.”
A classic moment caused a new media and old media convergence as the online peer pressure to see White host “SNL” rapidly grew and started attracting widespread traditional media attention.
That mutual attraction is partially what convinced “SNL” Executive Producer Lorne Michaels to ask America’s “biggest star” — as a Jay Leno called her on Wednesday night’s “The Tonight Show” — to host the show last weekend.
Now there are thriving Facebook campaigns to have White, who jokingly called the site "a huge waste of time" in her “SNL” monologue, run for president, re-host SNL and take center stage at the Oscars.
"I created it on Sunday night after reading online and seeing on TV all the response about how wonderful she was on ‘Saturday Night Live,’ which she was," Doyle C. Durando, the fan behind Getting Betty White to Host the Academy Awards, told TheWrap. 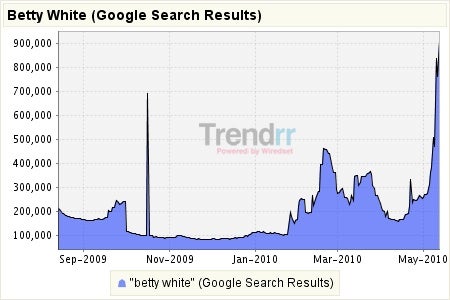 "I just thought how great she would be on the Academy Awards and that was my motivation for creating the page. I went to bed with around 2,800 users — but by the next morning it had exploded."
With over 84,000 fans and growing by the minute, the rocket is definitely on the launch pad. However, despite all the current heat, Oscar lift-off for White — who is not even a member of the Academy of Motion Picture Arts and Sciences — is not coming quickly.
"Of course we love that people are so passionate about the next Oscars almost nine months before it airs," Academy spokesperson Leslie Unger, who is a self-admitted Betty White fan, told TheWrap. "However, the host will be selected as they have in the past, which is once there is a producer on board it is really up to them to decide who would best serve the show they are putting on."
For the 82nd Academy Awards, the appointment of producers Adam Shankman and Bill Mechanic was announced on Oct. 20, 2009, with hosts Steve Martin and Alec Baldwin following soon after on Nov. 3. The 83rd Academy Awards will be held on Feb. 27, 2011 — with or without Betty White hosting. 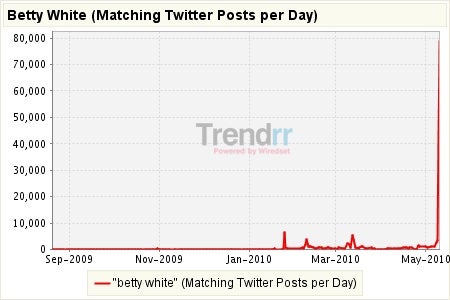 "They don’t have to go with anyone who’s popular on Facebook," says campaign initiator Durando, who has been trying to contact White’s management. "But with the response we’ve gotten on the page, and the new time and era we are in with social media, they at least have to seriously consider it."
"What really pushed Betty White to the forefront, says SAG’s Howard, “is the sheer awesome nature of Betty White."
An awesome nature that isn’t entirely unaware of the power of PR, says Hollywood publicist Valerie Allen. Knowledge that makes White’s newly refreshed stardom all the more impressive in today’s niche-marketed environment.
"She is not someone you’d expect to be social-media savvy, so it put a fresh spin on her," notes Allen.
That’s a fresh spin with a timely purpose — Betty White is returning to weekly TV in June on TVLand’s "Hot in Cleveland," co-starring Valerie Bertinelli, Jane Leeves and Wendie Malick.
"She’s been able to leverage social media and the internet to raise her profile and reach a whole new audience," Allen told TheWrap. "I think the Facebook campaign might have started out grassroots, but the feeding of it and her out to the press certainly seems like a well-timed and well thought out strategy on multiple platforms." 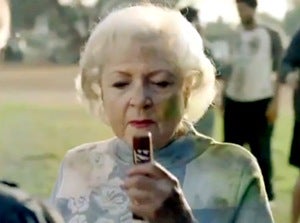 Of course, with the stakes so heightened — if White hadn’t been able to pull it off on “SNL” — we’d probably be writing a career obit instead of a career upswing.
"It’s one thing to play a sharp-witted 88 year old in a movie because editing can fix any physical slowdowns," says director Chu, "but from her first monologue you could tell, she was right on it."
Or as one fan wrote on the Betty White to Host SNL Facebook page, "Funny is funny at any age. Talent is talent!"
Tell that to Oscar.