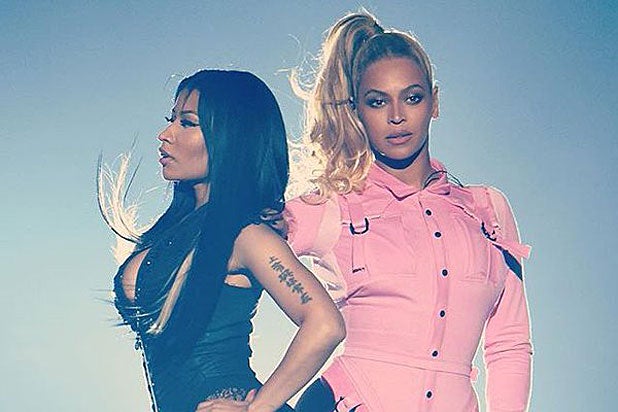 Tickets to the Tidal X: 1020 Amplified by HTC benefit concert at the Barclays Center in Brooklyn, New York, sold out within minutes and those who couldn’t make the show flooded the web to watch livestreams of the performances on sites like TheWrap.

The indisputable highlight of the night featured Minaj and Beyoncé taking the stage together for “Feeling Myself,” with one Twitter user saying afterwards: “This performance was everything and anything this world will ever need.”

“That was a moment of culture,” another super-fan wrote, while a third called it the “single greatest moment in history.”

Others described the entire show as “insane,” with some crediting Jonas with “killing it.” Jay Z also brought the crowd to its feet during a collaboration with  his wifey on “Holy Grail.”

Proceeds from the event will go to the Tidal X FUND at the New World Foundation to help raise awareness and funding for positive social impact worldwide. The streaming service vowed to match 100 percent of all net gross proceeds from ticket sales.

That iconic moment when these two women snatched hundreds of weaves at the same time: #BeyNika #TIDALX1020 https://t.co/2fZVhIylkh

BREAKING: Tragedy strikes as thousands slayed at #TIDALX1020 by @NICKIMINAJ and @Beyonce in coordinated attack. They remain at large.

NICKI MINAJ AND BEYONCÉ JUST TOOK THE WHOLE SHOW, THESE ARE THE QUEENS. #TIDALX1020 pic.twitter.com/MDg6pQtjA2