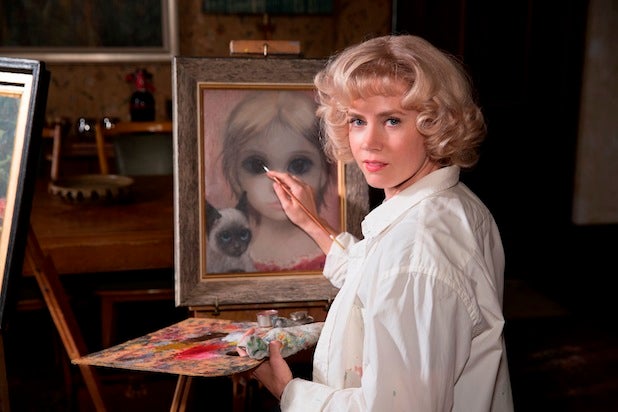 Tim Burton‘s “Big Eyes” was unveiled to the public on Thursday night at the Los Angeles County Museum of Art, the same museum that recently presented a career-spanning exhibition of Burton’s work.

“Big Eyes” adds something of a change of pace to that career, though it also contains lots of the things audiences have come to appreciate about the director’s work: It’s got flashes of creepiness and abundant humor, it puts outrageousness side-by-side with emotion, it’s populated by misfits looking for a place in a sometimes hostile world, and like Burton’s 1994 film “Ed Wood” (written, as was “Big Eyes,” by Scott Alexander and Larry Karaszewski) it tells a true story that sometimes seems too weird to have actually happened.

Gentler and less macabre than many of Burton’s films, “Big Eyes” played exceptionally well to the audience at LACMA’s Bing Theater, the first time the extensive Film Independent at LACMA series has presented a world premiere.

“It is to be taken seriously, despite the comedic aspect,” star Christoph Waltz insisted – and while the audience did take it seriously, the comedy often dominated, particularly in a lengthy, hysterical courtroom sequence that made up the film’s climax.

Afterwards, Harvey Weinstein stood in the back of the theater beaming, and suggesting that the successful unveiling might actually change the Weinstein Company’s release plans.

“Our whole team is so excited about this,” said Weinstein. “We had five screenings today for critics and other groups, and it played great at all of them.

“We were planning to put it out in January [after a December Oscar-qualifying run], but we might go early and do it in December instead.”

“Big Eyes” stars Waltz as artist Walter Keane and Amy Adams as his wife Margaret, who in the early ’60s became rich, celebrated and mocked for kitschy portraits of kids with gigantic eyes, which at the time were attributed to Walter.

The Keanes were polar opposites: Walter was a born showman and salesman, while his wife was so shy and timid that even today, said Adams, “it takes about an hour to get eye contact” with Margaret, now in her 80s. (Adams is clearly in the running for her sixth Oscar nomination for her performance as Margaret.)

After the couple divorced, Margaret revealed that she was the true creator of all the paintings, a declaration that resulted in a trial in which the jury sided with Margaret and awarded her $4 million in damages.

During the trial, Walter insisted upon acting as his own lawyer. He cross-examined himself, grandstanded and went so far over the top that moderator Elvis Mitchell compared the sequence to a Three Stooges movie in a post-screening Q&A.

“People don’t believe it,” said Burton, “but we toned down the courtroom scene.”

After the screening, Karaszewski told TheWrap that he and Alexander, who had been working to get the film made for more than a decade, pulled lines from the court transcript but had to eliminate many of the actual events.

“The judge actually had Walter’s mouth duct-taped shut during some of the trial,” he said. “We couldn’t use a lot of what really happened, because nobody would buy it. Walter was completely over the edge by that point.”

In the Q&A, Burton pointed out that Alexander and Karaszewski, who also wrote “The People vs. Larry Flynt” and the Andy Kaufman film “Man on the Moon,” “sort of excel in these weird people who are real.”

And when Mitchell pointed out that Burton’s films are often about artists looking for avenues in which they can express themselves, but ones who “have an ambition that doesn’t quite match their talent,” Burton shrugged.

“Well, I understand that completely,” he said. “That’s the story of my life.”