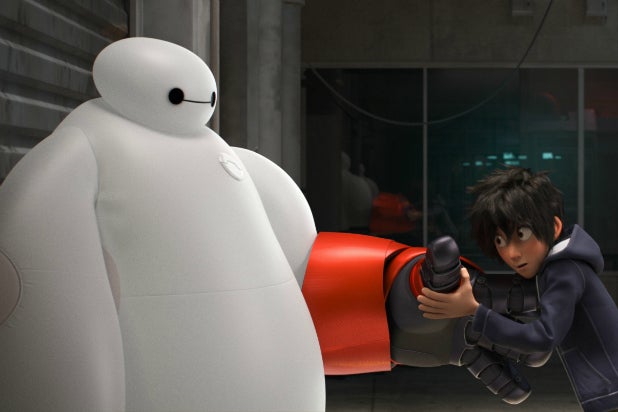 Complain all you want about the current vogue of superhero movies, but if every so often we get a “Big Hero 6” — a kid-friendly saga that features an Asian protagonist, an ethnically- and gender-diverse group of costumed crusaders, and positive messages about science, education, and compassion — then it justifies the genre’s existence.

Directors Don Hall (the lovely, under-appreciated 2011 “Winnie the Pooh”) and Chris Williams (“Bolt”) have incorporated the visuals and the adrenaline of Japanese anime into an American context, resulting in a film that feels thrillingly global yet relatably specific. (The setting of “San Fransokyo” is one of the best melded fantasy movie metropolises this side of “Babe: Pig in the City.”)

Fourteen-year-old high-school graduate Hiro Hamada (voiced by Ryan Potter) wastes his talents at electronics on underground bot-fighting, until his older brother Tadashi (Daniel Henney) convinces him to join him in college; far from the “nerd school” Hiro had assumed, San Fransokyo Tech is where Tadashi and his friends — including Gogo (Jamie Chung, “Once Upon a Time”), Wasabi (Damon Wayans Jr.), Honey Lemon (Genesis Rodriguez), and goofy sidekick Fred (T.J. Miller) — are making exciting discoveries and inventing really cool stuff.

Tragedy strikes when Hiro presents his extraordinary, thought-controlled nano-bots as his admission project: there’s an accidental explosion, costing Tadashi and distinguished professor Robert Callaghan (James Cromwell) their lives. Hiro is devastated at the loss until he discovers Baymax (Scott Adsit, “30 Rock”), the sweet-natured health-care robot that Tadashi invented (and imbued with his sense of kindness and understanding).

Baymax is blobby and inflatable and in no way the kind of robot you would imagine would be helpful in chasing down bad guys, but when Hiro realizes that someone has stolen his nano-bot tech for nefarious purposes, he attempts to retool Baymax into a flying, karate-kicking mecha-weapon of vengeance. Tadashi’s old friends get outfitted with superhero costumes and tricked-out weapons, but the situation gets complicated when they (and Baymax) realize that Hiro is blinded by revenge in his pursuit of justice.

It’s in that third act that you can feel the film getting tethered to the tracks of kid-movie narrative, but “Big Hero 6” has built up so much creative goodwill by then that it’s easy to forgive. The lush and vibrant visuals help in that department; this is one of the few 2-D films I’ve ever seen that I want to go back and see again in 3-D.

Even with Tadashi’s death (to say nothing of the fact that the Hamada brothers are, in true Disney fashion, orphans), the film balances out the mournful moments with lots of big laughs. The screenplay offers the kind of gags certain to be cited during fist-bumps and “On a scale of 1 to 10, describe your pain” prognosis for years to come.

Sweet and sharp and exciting and hilarious, “Big Hero 6” comes to the rescue of what’s become a dreaded movie trope — the origin story — and launches the superhero tale to pleasurable new heights. Even if you’re anti-“Avengers” and dreading the parade of Zach Snyder DC Comics adaptations over the next few years, you might consider giving this costumed bunch a shot.