Former President Bill Clinton honored Fleetwood Mac singer-songwriter and keyboardist Christine McView, who died Wednesday at 79, saying he is “grateful” to her and the band “for entrusting us” with their song “Don’t Stop.”

The song, written by McVie for the band’s 1977 breakthrough album “Rumours,” was used as Clinton’s campaign song for his 1992 presidential run. Already one of the most enduring pop hits of its era, the song became indelibly associated with Clinton’s campaign and his eventual victory.

“I’m saddened by the passing of Christine McVie. “Don’t Stop” was my ’92 campaign theme song – it perfectly captured the mood of a nation eager for better days. I’m grateful to Christine & Fleetwood Mac for entrusting us with such a meaningful song. I will miss her,” Clinton said in a brief statement posted to his Twitter account. 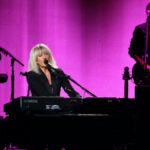 The band had broken up in 1987 but reunited for one night only to play Clinton’s inauguration in 1993, forever linking Fleetwood Mac and the first Boomer president in popular imagination.

McVie died Wednesday following what was described as a brief illness, leaving behind a legacy as one of the most successful and well regarded songwriters of her era. Known by her nickname “Songbird,” she wrote or cowrote some of Fleetwood Mac’s most popular songs, including “Don’t Stop,” “Hold Me,” “Little Lies,” “Everywhere” and “Isn’t It Midnight?”

“There are no words to describe our sadness at the passing of Christine McVie. She was truly one-of-a-kind, special and talented beyond measure,” Fleetwood Mac wrote in a statement announcing her death. “She was the best musician anyone could have in their band and the best friend anyone could have in their life. We were so lucky to have a life with her. Individually and together, we cherished Christine deeply and are thankful for the amazing memories we have. She will be so very missed.”