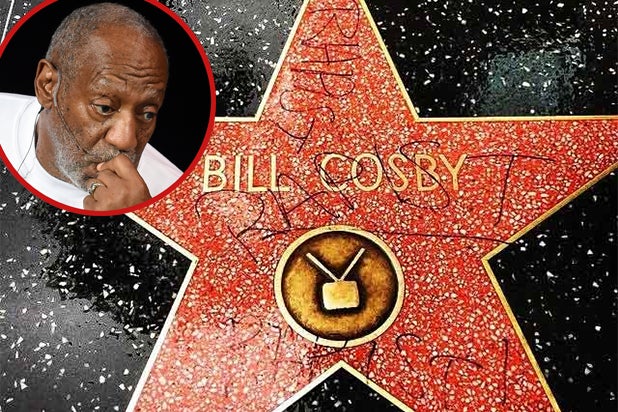 Bill Cosby‘s star on the Hollywood Walk of Fame has been defaced amid mounting accusations of rape, drugging and sexual assault, with the word “rapist” written across it several times.

The Hollywood Chamber of Commerce has condemned the vandalism, vowing to clean the graffiti.

“The Hollywood Walk of Fame is an institution celebrating the positive contributions of the inductees,” a representative told TheWrap on Friday. “When people are unhappy with one of our honorees, we would hope that they would project their anger in more positive ways than to vandalize a California State landmark. The star is being cleaned up at this time.”

As TheWrap previously reported, the comedian has been accused of rape or sexual assault by well over 20 women. The crimes are alleged to have been committed over the span of several decades, but many of the allegations have only come in recent weeks.

Cosby hasn’t yet been charged with any crimes stemming from those allegations, but there has been other types of fallout. Many of his upcoming live performances have been canceled or postponed amid the swirling storm of claims. Netflix has postponed his special indefinitely and TV Land even nixed “Cosby Show” reruns from its lineup.

In addition, Cosby has resigned from the Temple board of trustees and on Thursday his honorary Naval title was revoked, with Secretary of the Navy Ray Mabus citing the wave of recent sexual abuse allegations as the cause.

Here is one tweet that captured the graffiti at its worst:
-

They defaced Bill Cosby's star on the Walk of Fame and wrote "Rapist" all over it. Damn! pic.twitter.com/LO1GxK1ZoS

-
Tim Kenneally contributed to this report.