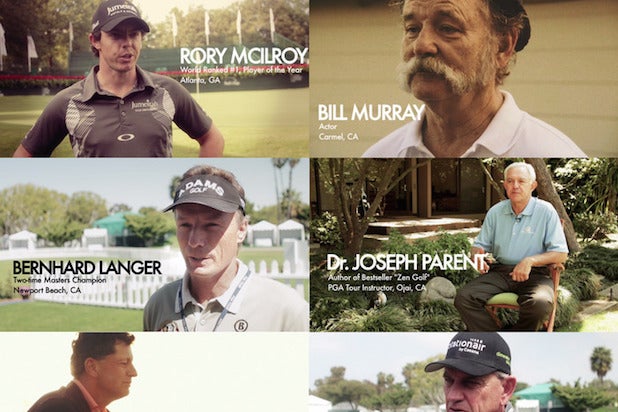 Filmmaker Erik Anders Lang has launched a crowdfunding campaign for “Be the Ball: A Golf Documentary,” which seeks to examine the history of the sport while also conducting a unique spiritual experiment on a select group of players.

In an interview with TheWrap this week, director-producer Lang [pictured left] joked that he “stalked” Murray for days to secure an interview with the press-shy actor, who starred in the classic golf comedy “Caddyshack.”

“I knew he’d be playing in a tournament in Pebble Beach, so I decided to go up there and follow him with a camera crew for a few days. And in the media tent on the last day, I asked him for an interview and promised I’d ask easy questions, and he agreed. So we get the camera set up and start rolling and as soon as I ask my first question, someone calls his name and he walks away for 30 minutes. But he came back and we did a 17-minute interview,” boasted Lang, who has developed an 8-handicap since he started playing golf five years ago. He even credited the game with strengthening his relationship with his brother.

A self-described high school dropout, Lang is a filmmaker who had a successful career directing music videos for Moby and Public Enemy and commercials for Sony, Hollister, Red Bull and Louis Vuitton, among others. His thesis for “Be the Ball” proposes that mental fitness is more important than skill or physical conditioning in golf, and that honing mental acuity can take players “into the zone” to achieve demonstrable results for amateurs and pros alike.

Unlike pro football, golf has managed to span the cultural gap between East and West, enchanting yet confounding millions of people around the world. Some people have played golf their entire lives and still consider themselves students of the game. Others spend thousands of dollars on equipment, training aids and golf lessons, yet nothing they do can improve their game. After all, even Tiger Woods and Jack Nicklaus have their off days, but why?

For “Be the Ball,” Lang plans to convene a group retreat — a master class of pros, celebs and amateurs — at a golf resort and put his theory of the mind-body connection to the test. The experiment will focus on the mental aspects of training by utilizing scientific techniques like biofeedback and physiological telemetry as well as methods ranging from meditation to Zen archery. Teachers will include the likes of Dr. John Demartini, Tim Kramer, PGA Master Professional Scott Cranfield, Julie Elion, and Mahadeva Ishaya, the Scottish monk turned golf pro.

By sharing and demonstrating mental techniques that promise to change your game, Lang hopes “Be the Ball” will be both illustrative and instructive as well as entertaining and educational. Lang aims to examine the mind-body connection as it pertains to golf, and how spirituality can illuminate the path to success.

Lang expects to complete “Be the Ball” in time for the 2016 Summer Olympics in Rio de Janeiro, where golf returns to medal competition for the first time in more than a century.

Production has already begun, but Lang is supplementing his own financing of the film with a Kickstarter campaign to raise $350,000 — about one-third of the budget — in order to perform his experiment. “It’s not cheap to bring professional athletes to a castle in Scotland and perform scientific experiments on them,” joked Lang, who up until now has financed the project on his own.

“Making the film isn’t a challenge, it’s fun. Reaching the goal is really the biggest challenge. I don’t really have a Plan B if we don’t reach the goal, so I’m doing everything I can to solidify that. I think the public will see that and support this movie,” said Lang, whose wife, recording artist Sia, will help him reward backers with personalized messages and music downloads.

One of the reasons Lang decided to make a documentary about golf was that it hasn’t been done before. “That’s what shocked me. No one has done it and no one has done anything with golf in a cool way, so I saw a big opportunity there,” explained Lang.

Watch the video below to see Shia LaBeouf, Cara Delevingne and Chelsea Handler (not) lend their support.