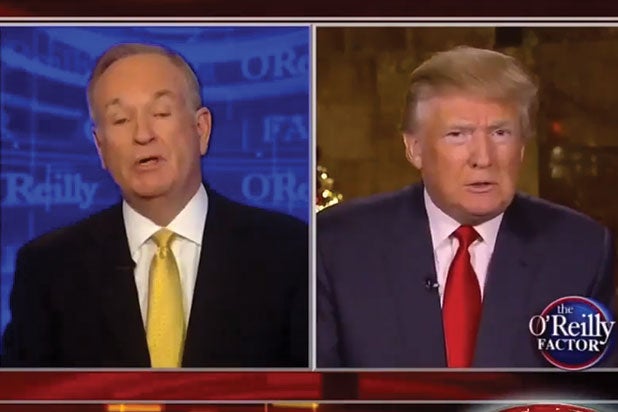 Bill O’Reilly has said he found no evidence to support Donald Trump’s claim that he saw “thousands” of Muslims celebrating in New Jersey in wake of 9/11, and confronted the GOP candidate on Thursday night.

Although O’Reilly admitted that “there were people, not thousands,” he blasted Trump for exaggerating the number of people Trump claimed he saw.

See Video: Bill O'Reilly Finds No Evidence to Back Up Donald Trump's Claim Muslims Cheered on 9/11

Trump went on to discuss the Paris attacks, explaining that during a moment of silence during a soccer game he “heard shouts from the Muslim world at the game that were horrendous.”

“Do you remember what country that was?” O’Reilly asked the presidential candidate.

“It was a different country,” Trump responded.

Circling back to Trump’s 9/11 claims, O’Reilly kept saying that there “were people, not thousands,” to which Trump yelled, “You don’t know that there were, Bill!”

O’Reilly had investigated Trump’s claim of seeing “thousands” of people celebrating in the streets of New Jersey in the wake of 9/11 and found no evidence to back up Trump’s claim.

“There were people in New Jersey, according to the state police, that were investigated — Muslims — who were happy about the 9/11 attack,” O’Reilly said on Tuesday’s episode of “O’Reilly Factor.” “But not vast numbers of them.”