“Somebody needs to gently break the news to Collinsworth that the Pats have a weak front 7 and that’s why Seattle’s o-line looks good,” he tweeted.

Simmons was skating on thin ice considering that his HBO show “Any Given Wednesday” was canceled on Nov. 4 after just four months due to dire ratings, but Collinsworth was quick to remind him.

“Thanks Bill, we’ll look for you ‘gently’ breaking it down on that hit show of yours,” he replied in a tweet that has since been deleted (but was kindly screen grabbed by the likes of Sports Illustrated). 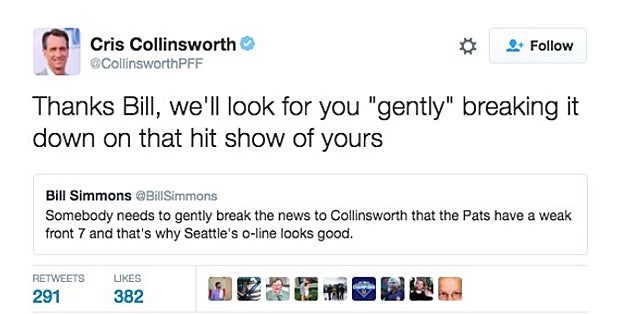 For those who are counting, NBC was first in ratings with a 5.5 rating/16 share in the advertiser-coveted 18-49 demographic and in total viewers with an average of 16.4 million on Sunday night thanks to a very close NFL game.

The Patriots also lost to the Seahawks 31-24, so it was a bad night all round for the Boston Sports Guy.

Bill Simmons - the sports guy with the magic touch. He practically reinvented sportswriting for the web at ESPN.com. He founded Grantland, a legendary (and now defunct) website. His podcast was a killer! So why was his HBO talk show "Any Given Wednesday" canceled after just four months? Read on to find out.