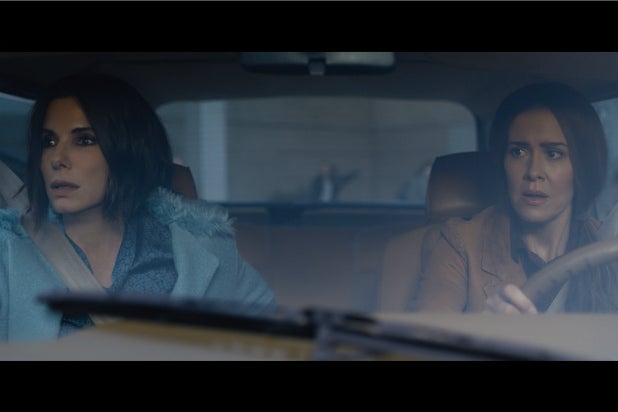 Netflix’s hit film “Bird Box” contains a scene which makes use of stock footage seen on TV matches that of news footage from a real-life tragedy, but there are no plans to replace it in the film, an individual with knowledge of the matter told TheWrap.

The footage shows the aftermath of the 2013 Lac-Mégantic rail disaster, in which an unattended freight train carrying crude oil derailed in the Quebec city’s downtown. Multiple tank cars exploded and sparked a fire, most of the city’s downtown was destroyed, and 47 people were killed.

The footage went unnoticed after the film’s Dec. 21 debut on Netflix, but became known this week after the mayor of Lac-Mégantic, Julie Morin, called on Netflix to remove the footage. Morin has since said in a statement that she’s spoken with Netflix about the footage and is satisfied that the situation will not happen again.

“They’ve committed to reflecting with their partners on the use of these images so that the situation does not repeat itself,” Morin said in a statement via the Associated Press. “We also felt they were sensitive to our citizens’ recovery. I’m satisfied with this exchange.”

The same footage previously appeared in another Netflix show called “Travelers,” and in a statement given to The Washington Post on Monday, Peacock Alley Entertainment, a Toronto-based production company that developed the Netflix show, apologized and promised to replace the footage, saying the clip came from an outside stock footage vendor, Pond 5.

“We sincerely apologize and had no intention to dishonor the tragic events of 2013,” Carrie Mudd, president of Peacock Alley Entertainment, told The Washington Post in a statement via a Netflix representative.

Pond5 said in a statement received by TheWrap that the “footage was taken out of context” and it wanted to “sincerely apologize to anyone who was offended, especially the victims and their families.”

Licensing footage from stock libraries of any event in TV production is considered a common practice and is not exclusive to Netflix.

Earlier in the week after Lac-Mégantic residents shared stills from the film to social media recognizing the tragedy, Morin spoke to the Canadian Press and called out Netflix and the stock footage companies for a “lack of respect.”

“We find that it’s really a lack of respect, to use these images as fiction and entertainment,” Morin said in a statement. “It’s hard enough for our citizens to see these images when they are used normally and respectfully on the news. Just imagine, to have them used as fiction, as if they were invented.”

See the full statement from Pond5 below:

It has recently come to our attention that our footage depicting the Lac-Mégantic rail disaster was taken out of context and used in entertainment programming. We deeply regret that this happened and sincerely apologize to anyone who was offended, especially the victims and their families.

Pond5 is a global content marketplace with over 14 million video clips, including fictional scenes as well as news coverage and archival footage. Some of the content we offer includes footage of historical tragedies, military conflicts, weather events, and natural disasters that may depict sensitive events. We believe that by offering this type of content, we enable these stories to be brought to light with the hope that history will not repeat itself.

Pond5 maintains the highest standards and employs multiple measures to guide customers to the appropriate usage of our footage. This includes AI-based technology and a team of professionals that reviews every asset for sensitivity, recognizable people, or third party intellectual property. We clearly tag and label all content on the site, and provide account managers and customer support for additional guidance. We license millions of clips every year, and it’s very rare that something like this occurs.

We are saddened by this incident and are taking additional steps to correct the situation. We are contacting all customers who have purchased any related clips to ensure they are aware of the sensitive nature of this footage. Additionally, we’re proactively re-auditing content of this nature, while continuing to improve our guidance for usage.