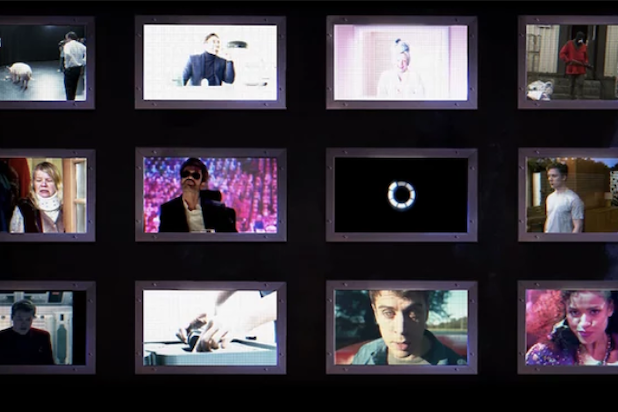 We have good news and bad news, “Black Mirror” fans.

The good news: Netflix has revealed via its own site that “Black Mirror: Bandersnatch” is going to be a film installment in the sci-fi anthology series. The bad news: The streamer hasn’t confirmed when the movie will drop or if it’s part of the show’s upcoming fifth season.

On Tuesday, eagle-eyed Reddit user PhoOhThree discovered “Black Mirror: Bandersnatch” chilling on its own Netflix page, separate from the landing spot for the Charlie Brooker-created series’ other 19 episodes. And it is labeled “A Netflix Film.”

Here’s a screenshot of the page:

The only other bit of info we get from this mysterious page is a “Be right back” description — which fans will recognize as the title of a Season 2 episode and one of the series’ favorite references for promos, not (direct) confirmation “Black Mirror” will actually “be right back.”

Representatives for Netflix declined TheWrap’s request for comment on “Bandersnatch,” including confirmation on its “film” status, when it will launch, what its runtime is and if it is part of “Black Mirror” Season 5.

“Bandersnatch” is the first “Black Mirror” project to be dubbed a “Netflix Film,” even though previous episodes’ runtimes have rivaled that of a feature, with Season 3’s “Hated in the Nation” clocking in at 89 minutes. Oh, and let’s not forget that both Season 3’s “San Junipero” and Season 4’s “U.S.S. Callister” are considered TV movies — having won the Emmy for Outstanding Television Movie.

But seeing as that prize is now out for any small-screen film that comes in under 75 minutes, per the Television Academy’s new rules, here’s hoping “Bandersnatch” doesn’t fall shy of that new mark.

Now, there is even more good news here — if we can trust a deleted tweet, that is.

Last month, the verified Netflix-operated account @NXonNetflix tweeted a list of some of the streamer’s series and film launch dates for December, one being (you guessed it) “Black Mirror: Bandersnatch.” And according to that schedule, “Bandersnatch” will launch on Dec. 28.

At the time, Netflix declined TheWrap’s request for comment on the reported leak and the premiere date for “Black Mirror” Season 5.

Also Read: Here's Everything We Know About 'Black Mirror' Season 5

However, if “Bandersnatch” — or “Bandersnatch” + Season 5 — is coming this month, it would be right on schedule, as the fourth season of the anthology series debuted on Netflix in the final week of December 2017.

If that’s the case, let’s hope it’s the eagerly-anticipated (but still not confirmed) “Choose Your Own Adventure” episode. And it might be, seeing as the Bandersnatch is a character in Lewis Carroll’s “Through the Looking Glass.” (Yes, you can go nerd-out about that somewhere else now.)