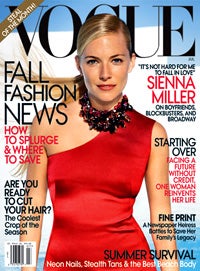 Historically speaking, September is a big month for big consumer magazines – particularly for a company like Condé Nast, which usually publishes fall fashion issues, each seemingly thicker than a Physicians’ Desk Reference.

Ad pages for W — the oversized magazine in which fashion advertisers love to see their enlarged ads — plummeted 53 percent.

As a whole, Condé Nast’s monthly magazines are down 37 percent, according to the New York Observer.

Publishers were expecting the ad page bounty to be lighter without Fashion Rocks – an annual supplement polybagged with Condé titles which the company canceled this year. 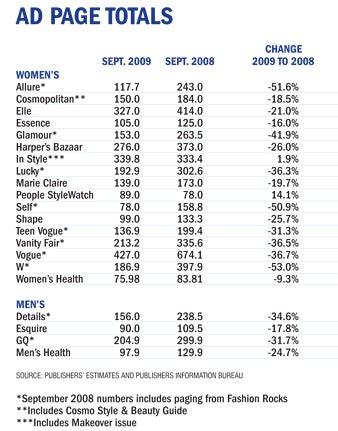 But Condé Nast executives are bracing for a fourth quarter that could be even worse. Even Condé-owned WWD admitted this week that the last three months of the year are expected to be brutal, in part because fashion advertisers are “still skittish about an economic turnaround.”

“Our books are down in the entire set,” Condé Nast Media Group senior vice president Lou Cona told WWD, “not because there’s a problem with print, but our clients’ businesses are impacted by the recession and by the lack of traffic at retail.”

With all due respect to Mr. Cona, that is precisely the problem with print – and all ad-dependent products. When the economy goes in the tank, glossies depending on big ad-spends by marketers wind up gasping for air.

Of course, the numbers are down — and blood pressures up — everywhere. The September fashion books at Hearst and Hachette are down, too. Elle, which has trumpeted its 2009 ad page lead over Vogue — the first time it has ever led its rival — saw ad pages tumble 21 percent. In fact, among glossy fashion titles, only Time Inc.’s InStyle managed to increase ad pages in September.

Condé Nast’s startling September ad performance comes on the heels of the news that the company has hired McKinsey & Co., the high-profile consulting firm, to “rethink” the business.

“This is a considerable and complicated task,” CN CEO Chuck Townsend explained in a memo to staffers on Monday, “forcing us to rethink the way we do business in many instances and incorporate efficiencies in every step of our process. Beginning this week, I am dedicating myself and a team of my colleagues to this project. We will work with consultants, including McKinsey & Company, to develop new perspectives on optimizing our approach to business, growing revenues, and enhancing our brand assets. All areas of Condé Nast will be included in the study.”

Some media insiders see the hiring of McKinsey as a frank admission that the company’s cost-cutting mandates in the last year — a five percent across the board cut last October, then a reported 10 percent slash, and the shuttering of Portfolio, Condé Nast’s $100 million-plus business magazine launch in April – did not work.

Although, whatever Conde is paying McKinsey for its think-tanking pales in comparison to the ad revenue it is seeing evaporate. To give you an idea, through June, ad pages for Condé Nast titles (including Portfolio and Domino, which Condé folded in January) fell 32.7 percent, representing a 27.3 slide in ad revenue, according to the Publishers Information Bureau – or roughly $477 million. Extrapolated to a full year – given the dire predictions – that figure could exceed a cool billion in ad dollars lost over 2008.

According to CN insiders, the mood inside Si’s old house is, understandably, “tense.” Said one staffer: “If they killed Portfolio,” which was down a whopping 60 percent in ad pages during the first quarter, Condé Nast executives could certainly be “looking to trim” similarly underperforming titles from their own.

Added another: “Everyone is talking about it, speculating, worried.”

That could sum up the mood of the entire magazine industry, too.