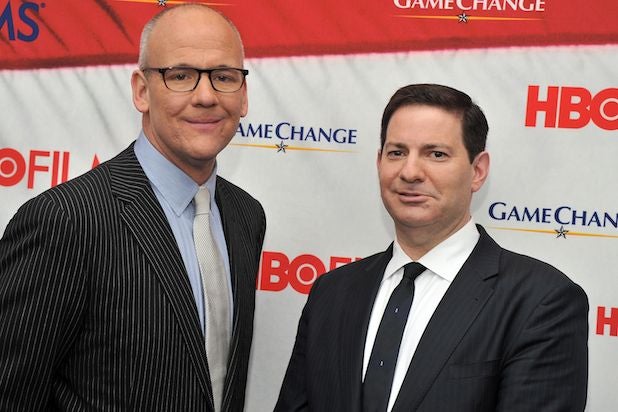 Veteran journalists Mark Halperin and John Heilemann have been chosen to lead Bloomberg Politics, online as well as on television, Bloomberg Media announced.

The duo, who co-wrote “Game Change” — a book about the 2008 presidential election, which HBO turned into an Emmy-winning movie — will oversee the launch of Bloomberg’s new brand across all platforms, while also hosting a new daily TV show that will stream online, too.

Together they will lead a merged team of Bloomberg News and Bloomberg Media reporters and editors in Washington and New York to deliver Bloomberg’s political coverage, including news, analysis, commentary, narrative, polling and data analytics.

Bloomberg Politics is the first in a series of new brands that the company announced earlier this spring. The company hopes the new strategy will deliver to targeted content environments in order to provide greater depth, context and community for each topic area.

See photos: ‘Game Change’ Sequel: Who Should Play Obama, Romney and Everyone Else in ‘Double Down’

They also co-wrote a New York Times bestseller “Double Down: Game Change 2012,” which HBO is also developing into a film.

“Mark and John have a remarkable and unrivaled track record of leading the conversation around American politics in print, online, and on TV,” Bloomberg Media Group CEO Justin B. Smith said in a statement. “They are also representative of an important new breed of journalist that works seamlessly and prolifically across digital, video, print and live platforms. They bring an extraordinary capacity for immersive storytelling, sharp analysis, and breaking news – and they will help us differentiate our political coverage from a crowded field through a full multi-platform approach.”