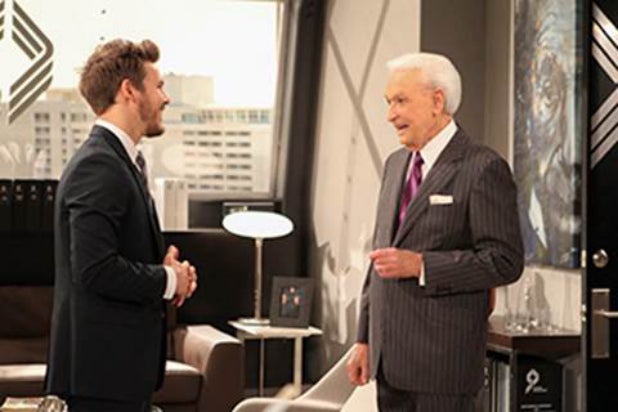 Someone unfreeze the super-skinny, long microphone: Former “The Price Is Right” host Bob Barker will return to CBS Daytime in a guest-starring role on “The Bold and the Beautiful” on Wed., April 30.

The daytime drama will feature a three-day arc about animal rescue, which suits Barker’s personal cause.

This episode will actually mark the game show icon’s second appearance on the show — his first episode was in March 2002.

In the cameo, the long-time animal rights supporter is interviewed by Liam Spencer (Scott Clifton) for a feature article on the issues surrounding control of the pet population. “Animals can’t speak for themselves, they depend on us to protect them,” Barker explains during the scene.

Barker encourages Liam to visit the local animal shelter, which he does, with Hope Logan (Kim Matula). They are greeted there by Brandon McMillan (Animal Trainer and Host of the CBS Saturday Morning’s “Lucky Dog”).

“In keeping with our commitment to spotlight real-life Los Angeles heroes, we are focusing this story arc on the work of animal care and rescue in our city’s shelters,” said Executive Producer and Head Writer Bradley Bell. “Bob is a highly respected advocate for animal rights and is an instrumental player in the storyline.”

Barker, who hosted “The Price Is Right,” television’s longest-running daytime game show from 1972 to 2007, is well-known for signing off each day with the quote, “Help control the pet population. Have your pet spayed or neutered.”

“The Bold and The Beautiful,” which celebrated its 27th anniversary on March 23, 2014, is a Bell-Phillip Television production.