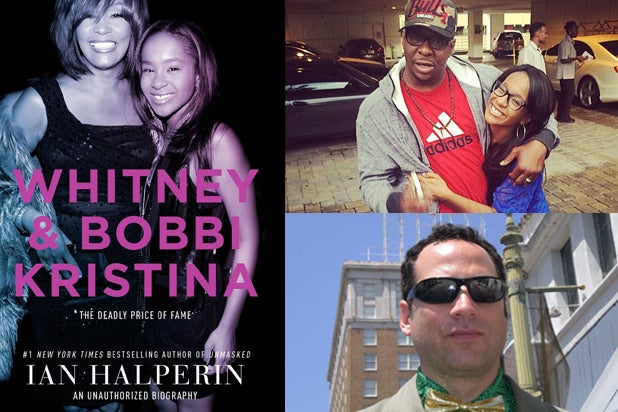 In his new book “Whitney & Bobbi Kristina: The Deadly Price of Fame” (Gallery Books), author Ian Halperin shares a number of bombshell revelations about ill-fated singer Whitney Houston and her equally troubled 22-year-old daughter Bobbi Kristina Brown, who’s fighting for her life after being found unresponsive in her bathtub in January.

The unauthorized biography discusses a plot to blackmail Houston over a lesbian relationship, and claims that Bobbi Kristina had been hooked on drugs and suicidal at the age of 14.

During an interview with TheWrap on Tuesday, Halperin dropped another bombshell: That the probe into what happened to Bobbi Kristina has been “botched” by the police department in Roswell, Georgia.

“Police have botched the investigation, mainly because they are basically a small-town police department with limited resources. I’m suggesting that the Atlanta PD takes it over.”

In the interview below, Halperin discusses the investigation at length, how Bobbi Kristina Brown’s father is handling the situation and how he hopes that his book can prevent further tragedy.

TheWrap: What compelled you to write this book, and when did you begin to put research together on it?
Ian Halperin: I knew Whitney’s dad years back, and I considered doing a collaboration with him. His name’s John Houston. Unfortunately he passed, and he gave me a lot of good information back then. But one of the regrets he obviously had is that he was estranged from Whitney at the end, he never was able to reconcile with her. So at the time I really felt mixed about it. I didn’t feel — it was the timing then, he’d passed — like putting something out. But when Bobbi had the accident I guess my journalistic instinct took over. I felt, as sad as the story is, and it’s a very tragic story, I felt that there was a need to get to what really happened. I was acutely aware that she was around a bunch of undesirables in Atlanta. I became aware, as my research progressed, how severe the heroin is in Atlanta. I covered Kurt Cobain in the ’90s, and heroin was terrible back then, lots of people were OD’ing. But seriously it’s nothing compared to Atlanta today. Atlanta has a major heroin problem and I think that has to be looked at, because if it didn’t, if the problem wasn’t so severe, I don’t think Bobbi would be in the condition she’s in today. And it’s not only heroin, it’s so many drugs in Atlanta.

Also Read: Bobbi Kristina Brown's Boyfriend Is 'Out of Control,' Says His 'Stepdad'

A lot has been said about Bobbi Kristina’s father, , since she was found in the bathtub. What’s your take on his behavior in the past few months?
I think has been falsely accused in the media. You know, he’s been by his daughter’s side — the right thing to do, obviously — 24/7. And a lot of people think he’s trying to profit. That’s the furthest thing from the truth. According to Georgia state law, and I spoke to two Georgia probate lawyers, if Bobbi passes, the estate would turn over to the next of kin. Despite what Whitney’s will said, Whitney’s will would only be valid if Bobbi pre-deceased Whitney, and that wasn’t the case. Under the present circumstances, it would be who would get the money and get the estate. So why would he be trying to profit? You know how expensive it is to keep her alive? People who are accusing of trying to profit, they’re out to lunch. He’s keeping her alive, and it’s costing exorbitant amounts of cash. Who can blame him? It’s his daughter, man. We’d probably do the same.

What about in the period prior to Bobbi Kristina’s accident? A lot of people accused and of not being around for her during her childhood. Do you feel like that relationship had an effect on how she turned out?
Oh for sure. But look — she was almost doomed from the get-go. She grew up in the shadow of both of them, famous parents. Who would have the talent? Who could fill their shoes, anyhow? She had aspirations to be a performer and possibly an actress, but who can fill those shoes? And then her parents are whacked out on drugs, and then she gets involved in the wrong crowd. So, who do we point the finger at? And believe me, I’ve stuck to the facts on this. I’m not including the outlandish claims reported by the tabloids since Bobbi Kristina was found, most of which are made up. That’s the one thing I realized while doing this — that the media has made up a lot of falsities about this case, and I can prove them all wrong.

Such as?
For instance, the relationship with . It’s ridiculous — every major media outlet reported that he was adopted by Whitney at 10 years old. I give the facts on how they actually met for the first time… only moved in when he was 18 years old, when he was kicked out of his mother’s home, and him and Bobbi Kristina were at different schools in close proximity, and he was dating a friend of Bobbi Kristina. And that’s how they met. He wasn’t adopted at 10 years old or anything like that.

Another thing that’s really sketchy, what the media’s reporting. They don’t realize that the police [in Roswell, Georgia] have botched the investigation, mainly because they are basically a small-town police department with limited resources. I’m suggesting that the Atlanta PD takes it over if we don’t get concrete results soon on this investigation. It’s taken way too long. They’re a small police department. I’m not faulting them, but I think it’s just a different magnitude. They’re not used to stuff like this, especially with all the media watching over them. I really think they need help to get to the bottom of it. Remember, she had bruises on her. Every day that passes, she’s irreversibly brain-dead, they’re not going to be able to do a proper autopsy, because bruises heal when you’re in a coma. That’s a fact.

What do you make of the reports of the family squabbling?
They’re not fighting over life support or money. Again, that’s more tabloid trash. They both love Bobbi Kristina, both the Houstons and the Browns. And they’re heartbroken over what happened to her. I think they’ve conducted themselves, and Cissy Houston and Pat Houston, with quiet dignity. Especially , who seems, finally, to be off the drugs and booze, and has comported himself with class throughout this whole ordeal.

How many people did you interview for the book?
About 250. And then a plethora of others who you really couldn’t take seriously. A lot of people were trying to misdirect the case and give me bogus information. But I’ve been to this rodeo before. I really need strong corroboration before I print something.

Was there anything that you discovered over the course of your research that particularly surprised or shocked you?
The drugs. The extent of the heroin. There were suicide attempts. But the thing that really got to me was how they used the [cold-water] plunge. And the plunges, addicts are regularly subjected to this. When people find them unconscious, they put them in a cold-water bath and try to revive them and slap them. That could explain the bruises. I’m still not also ruling out that other things might have happened, and some people, I predict, will be held accountable. There were a lot of enablers around Bobbi Kristina. Face it — , he spread a lot of falsities. He said at one point they were married. We hired a private investigator, we did a nationwide search to find a marriage certificate. There was nothing. The ring, a lot of the media said it was worth much more than it was. I actually tracked down the jeweler. I saw the receipt. The actual receipt, what he paid for the engagement ring, was something like $7,900, not the rumored six figures that the media was spreading. But , you know, he was living high off of Whitney’s estate, driving fancy cars. Wearing Rolex watches and Breitlings, all the bling. And this guy’s never worked a day in his life. I have a problem with that, the enablers. People sponging off Bobbi Kristina and Whitney’s estate. And I could understand why the Houston family has had grave concerns. I would too if it was my daughter.

has made a lot of noise about not being able to visit Bobbi Kristina in the hospital. Do you think it’s wise to keep him away from her?
I support . Because he’s the father, he’s next of kin. is not next of kin unless he produces a marriage certificate, and I think has acted with silent dignity in this case. And he’s gotta be commended.

Speaking of the family, have you heard any feedback, positive or negative, about the book?
Most people surrounding the Houstons and Browns are very supportive of this book. If you read it, it’s very fair, very balanced. I’m not out to do a hatchet job. I never do. I’m out to get to the truth. Unfortunately, sometimes the truth hurts.

Aside from dispelling some of the media myths out there about and Bobbi Kristina, what else do you hope the book accomplishes?
I think it’s important that anybody young who wants to get into the entertainment business, that their parents read this book. Because this is the seminal book about the pitfalls and the perils of the entertainment business, especially the music industry. And the only positive thing out of this, because this is a major tragedy, is if people read this book, they won’t end up like Whitney or Bobbi Kristina. They’ll be more educated about how to avoid those perils. That’s the only positive I see here.