Bobbi Kristina Brown’s aunt says that her bombshell tell-all book is “just about ready for the world” — and she’s cautioning readers to “Expect to be blown away with the truth.”

In a Facebook post on Sunday, Leolah Brown said that she has “not left any one single thing out.”

She added, “If I were spooky — I’d say, besides the Almighty God — Whitney [Houston] and Krissi has taken over my hands!”

In past posts, Leolah Brown — who is engaged in a very public feud with Bobbi Kristina’s other aunt, Pat Houston — has said that the book will expose the truth about Bobbi Kristina’s death, at least as she sees it. Earlier this month, Brown called her niece’s death a murder, and said that Pat Houston and others “did everything they could to literally see to it that Bobbi Kristina was completely gone!”

Bobbi Kristina Brown, the ill-fated daughter of Whitney Houston and Bobby Brown, died in July at age 22, six months after being found face-down and unresponsive in the bathtub of her Georgia home.

While the Fulton County Medical Examiner’s office has said that it has determined the cause of Brown’s death, those results have been sealed. The Fulton County District Attorney is continuing to investigate the matter. 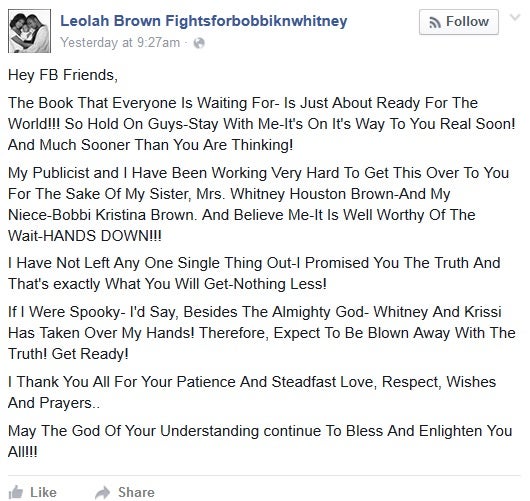