How did Tinseltown recover from Oscar week festivities? More revelry of course. "Slumdog Millionaire"’s Anil Kapoor networked with Salma Hayek at a book party for her hairstylist, Robert Vetica, at Beso in Hollywood on February 26.  Who knows what the two discussed so intensely, but would an "Ugly Betty" guest spot be out of the question? Hey, stranger things have happened…

The next night, Marisa Tomei surfaced to hobnob with billionaire Richard Branson who launched V Australia with a party at Bar Marmont. So the once seemingly reession-proof entrepreneur might not have record stores in the U.S. any more. Wah-wah. He now has a far splashier claim to fame: running the only airline in the world to offer a trans-global service, which no doubt got the attention of partygoers Ashlee Simpson Ashlee Simpson, Pete Wentz and Kristin Davis. Surely he could cough up some tickets Down Under for Tomei to help soften the blow of her Best Supporting Actress loss to Penelope Cruz. That beats a vacuum cleaner – and whatever else stuffed the Oscar swag bags – any day! 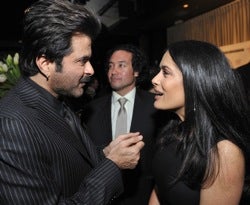 Jon Hamm harbors no ill will toward Breaking Bad’s Bryan Cranston, who beat him out for the Emmy last year. The "Mad Men" stud showed up to support his pal at the premiere of the drama’s second season on February 26 at the Arclight in Hollywood. After all, the two share the AMC family. Meanwhile, "Desperate Housewives" stars Eva Longoria Parker and Marcia Cross rallied around Felicity Huffman at a screening for her new film, "Phoebe in Wonderland" at the WGA in Beverly Hills on March 1.

Hollywood Boulevard got some brotherly love on February 24 when The Jonas Brothers showed up at the El Capitan Theatre to premiere their 3D concert flick much to the delight of screaming tweens with posters proclaiming their undying love for the trio. The Brothers came and went but the ear-ringing must have gone on for several hours after. Just when the Boulevard had recovered, the teen idols popped inside the same movie house a few days later to surprise the audience at a midnight showing.

Just down the street, Broadway juggernaut "Rent" opened at the Pantages Theatre. On February 27, Neil Patrick Harris, who starred in a touring production of the musical, watched Anthony Rapp take the stage alongside fellow original Broadway cast member Adam Pascal. Also in the audience: the parents of the late Jonathan Larson, who penned the La Boheme-inspired play. Later, the group celebrated with an intimate gathering at Cafe Was.

Finally, on February 25, Arianna Huffington and LACMA head Michael Govan co-hosted a soiree at the museum for marketing wiz Linda Resnick, who penned "Rubies in the Orchard: How to Uncover the Hidden Gems in Your Business."  Nice, light reading for guests, including Warner Bros’ Entertainment’s Alan Horn, MySpace’s Chris DeWolfe, John Landis, Sumner Redstone and his ex Paula Fortunato.