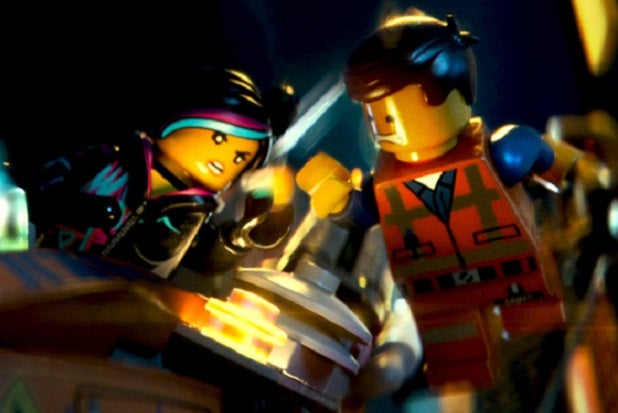 Because nothing says romance quite like plastic interlocking toy pieces, reigning champ “The Lego Movie” should continue to dominate the box office over the long holiday weekend that begins on Valentine’s Day.

Warner Bros.’ 3D animated comedy juggernaut is riding a crest of critical and audience love, and has played strongly through the week. It was easily the No. 1 choice at online ticket broker Fandango on Thursday and, with schools closed Monday for Presidents Day, it could hit $55 million over the four days, say the analysts. It will go into its second weekend on a market-high 3,775 theaters having banked more than $80 million in six days.

More traditionally romantic films like the comedy “About Last Night” and “Endless Love,” both remakes of 1980s hits, enter the market this weekend, along with the romantic fantasy drama “Winter’s Tale” and the action film counter-play “Robocop,” another ’80s remake that opened Wednesday.

“Robocop” is projected to finish the six days with around $45 million and is the best bet to finish second for the weekend, says the analysts, who see Sony’s “About Last Night” at $24 million for the four days, Universal’s “Endless Love” around $12 million and Warner Bros.’ “Winter’s Tale” at roughly $10 million.

Fresh off his breakout hit “Ride Along,” red-hot Kevin Hart stars in “About Last Night,” along with Michael Ealy, Regina Hall and Paula Patton. It’s a remake of the 1986 Ed Zwick-directed rom-com, based on the David Mamet play “Sexual Perversity in Chicago,” that starred Demi Moore and Rob Lowe as a young couple launching a committed relationship.

This version, produced for a modest $13 million, features a mainly black cast and is set in Los Angeles. Steve Pink (“Hot Tub Time Machine”) is the director, it is written by Leslye Headland and the producers are Will Gluck (“Friends With Benefits”) and Will Packer, who produced “Ride Along.”

“About Last Night” has been tracking steadily and is even hotter on Twitter than “Ride Along” was at a similar stage. It is rated R however, and that will make it tough to match that film’s record debut.

“Endless Love” features Alex Pettyfer and Gabriella Wilde in the roles played by Martin Hewitt and Brooke Shields in the original 1981 tale of troubled young love. That one was directed by Franco Zeffirelli, and also featured Tom Cruise and James Spader in some of their earliest film roles.

Shana Feste (“Country Strong”) directs and co-wrote the update with Joshua Safran, and it was produced by Josh Schwartz, Stephanie Savage, Paula Abdy and Scott Stuber.

The target market is young couples — and unlike the original, this one is rated PG-13, which will help. Its tracking has been solid and rising of late, and it is strong on social media. Given the material and target audience, it’s a good bet that Valentine’s Day will be its biggest.

With a budget of less than $20 million,  Universal would be happy with $10 million over the four days for “Endless Love,” which is also opening this weekend in selected foreign territories including the U.K. It will be in roughly 2,900 theaters.

The PG-13-rated romantic drama “Winter’s Tale,” from Village Roadshow and Weed Row Pictures, was written and directed by Akiva Goldsman. It’s the feature directing debut for the writer behind “A Beautiful Mind,” “I, Robot” and “The Da Vinci Code.”

It’s based on Marc Helprin’s 1983 fantasy romance novel, which is set in a mythic New York City. In it, a burglar falls for an heiress as she dies in his arms. When he learns that he has the gift of reincarnation, he sets out to save her.

Mature audiences, particularly women, are the target demographic. But it hasn’t shown much tracking strength and is getting very little social media traction, so expectations are low for ‘Winter’s Tale,” which has a $46 million production budget.

Goldsman produces as well, along with Marc Platt, Michael Tadross and Tony Allard.

Warner Bros. will have it in roughly 2,750 theaters.