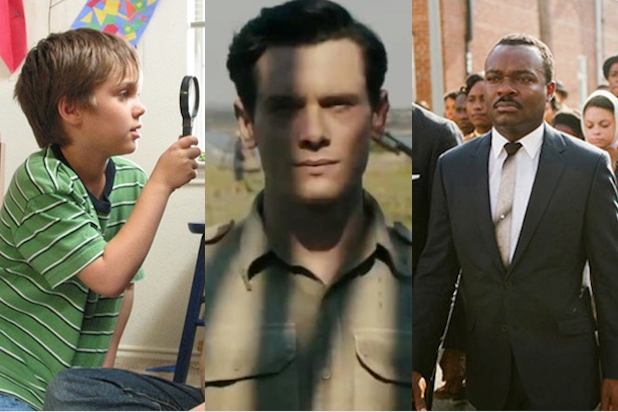 Richard Linklater‘s “Boyhood,” Alejandro Inarritu’s “Birdman,” Ava DuVernay’s “Selma” and Angelina Jolie‘s “Unbroken” are among the best films of the 2014, the American Film Institute announced on Monday, as it expanded its usual Top 10 list to 11.

Two of the most surprising inclusions on the list, which ended with 11 films despite a process that included tiebreakers, were the Rob Marshall musical “Into the Woods” and Dan Gilroy’s dark “Nightcrawler.”

Wes Anderson’s “The Grand Budapest Hotel” was missing from the list but expected to contend for Oscar nominations — as was “The Theory of Everything,” which was ineligible for AFI honors as a non-American production. Also left off were “Wild,” “Inherent Vice” and the National Board of Review’s top film of the year, “A Most Violent Year.”

Last year, seven of the nine Oscar Best Picture nominees, including winner “12 Years a Slave,” made the AFI list. Only “Dallas Buyers Club” and “Philomena,” another non-U.S. production, were nominated for the top Oscar after having been left off the AFI Top 10.

Since the Academy expanded its Best Picture category in 2009, 36 of the 47 Oscar nominees have first appeared on the AFI list.

On the television side, a jury chaired by former Walt Disney Television chairman Rich Frank went with a slate that included “How to Get Away With Murder,” “Jane the Virgin,” “Orange Is the New Black” and “Transparent.”

The honorees will be saluted at a private luncheon in Los Angeles on Jan. 9.