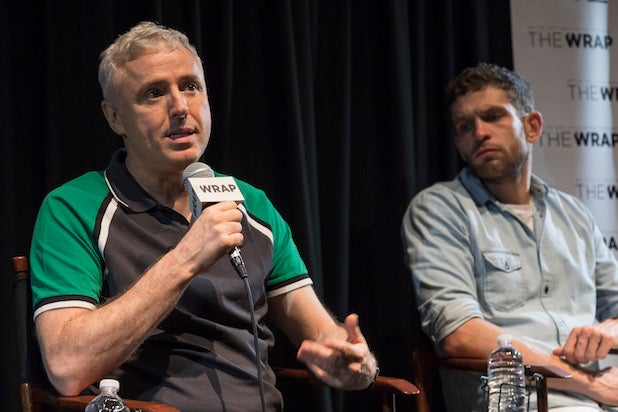 BPM screening hosted by The Wrap at the Landmark Theatre in Los Angeles. Q&A with: Director Robin Campillo and star Arnaud Valois

At a screening of the French film “BPM (Beats Per Minute),” an audience member named Keith stood up during a Q&A with Director Robin Campillo and revealed himself as an AIDS survivor. Filled with emotion, he said Campillo’s film captured his experience suffering from the diseases in the mid 1980s and that it reminded him that people still die regularly from AIDS as a result of ignorance and indifference.

“I’ve been screaming for four years that the epidemic is not over, that we’re still going to go through this,” the man, who only identified himself as Keith, said during TheWrap’s Awards and Foreign Language Screening Series at the Landmark Theatres in Los Angeles on Tuesday. “It’s not over, and this film is perfect for right now. Whether you intended it to be or not, it is, because I’ve been trying to bridge this younger community toward strengths, and you’re getting total denial of any of it because they don’t know history.”

“BPM” is the French Oscar submission for Best Foreign Language Film for the 2018 awards, and it won the FIPRESCI Prize and the Grand Prize of the Jury when it premiered at this year’s Cannes. It’s in part a colorful, lively film about political activism in the face of AIDS, but it’s also an intimate gay romance between two dying lovers.

“For me, living it, that’s my life in a lot of ways,” Keith said. “I love the fact that you made it long, because everyone started squirming the longer it went, and that’s how it felt every single day for 10 years. You were uncomfortable constantly, but yet you were connected and bonded.”

“BPM” focuses on the work of the activist group Act Up Paris, of which Campillo was a member in the early ’90s. Their radical demonstrations targeted politicians and pharmaceutical companies that withheld information and didn’t do enough to fuel prevention and medical research. But they also targeted schools and those in the LGBT community who wanted to avoid the truth of the epidemic. “Silence = Death,” signs in the film read, and “BPM” is a film about refusing to behave.

“For 10 years, we were such nice gay guys, victims of the epitome. People were crying over us, and it was full of indifference to the drug users and prostitutes.” Campillo told TheWrap’s Matt Donnelly. “We were fed up with being the good gays. We wanted to be evil fags and outcast dykes. If people were afraid of us as gays and lesbians, we choose to use this fear as a weapon.”

“BPM” star Arnaud Valois explained how this role helped him to speak up to younger LGBT people about the history of the AIDS crisis as well.

“They weren’t aware that people could actually die from AIDS,” Valois said. “They are really shocked. They want to be part of something now, to be part of this group, and the power of this group is something they are really into when they watch the movie. They ask Nahuel [Perez Biscayart] and I, ‘should I go in a group for prevention or protection?’ It’s up to you, but just do it.”

“Indifference is even more dangerous than the far right,” Campillo added, speaking of the need to go beyond armchair activism on social media. “In Act Up, before confronting the politicians, we knew we have to confront each other, and that creates better politics. We are much more intelligent, much more clever together.”

Campillo said he first went to an Act Up meeting because he had a sex date, but the guy he was meeting never showed. Five years later he was still a member, motivated by the rousing, fast-paced political debates as depicted in the film. Working on the group’s signage and slogans inspired his creativity and taught him to be a director and one day tell Act Up’s story.

“It took me 35 years,” Campillo said. “I did it when I had enough distance from this narrative in my life. A lot of people were asking me if I did it because of the political situation in the world. But I did it because I thought it was the right time to do it for myself.”

The Orchard is distributing “BPM (Beats Per Minute)” and just released it in limited release on October 20.