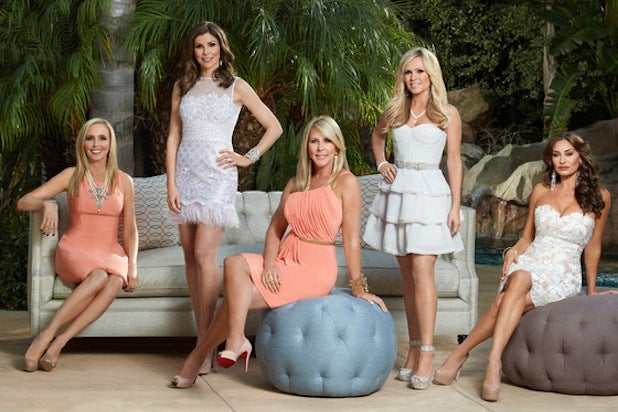 Drama, drama, drama: Bravo Media has renewed “Flipping Out,” “Married to Medicine,” and “The Real Housewives of Orange County” (pictured above). It also set the premiere date for its second original scripted series, “Odd Mom Out,” which will debut on Monday, June 8.

Finally, Bravo is developing “The One” from executive producer Charlize Theron, which was previously announced on Thursday under the terms of her first-look Universal Cable Productions deal.

Below are the details of the returning series in Bravo’s own words, as well as the premiere dates where applicable.

Everyone’s favorite interior designer, Jeff Lewis, and his genius design team including Jenni Pulos are back in action for season eight and taking their business to the next level. Not only is business expanding, but so is Jeff’s family as he moves forward with a plan to have a child.

“Married to Medicine” Season 3
Produced by Fremantle North America and developed by Purveyors of Pop with Matt Anderson and Nate Green serving as executive producers.

The fabulous ladies return for a third season full of friendships, rivalries, medical moments and high stakes drama. This year, the ladies deal with tough issues both personal and professional. From juggling careers as MDs and moms to keeping friendships alive in the wake of a shocking betrayal, this season is sure to keep your blood pressure elevated.

These ladies show no signs of slowing down and although they may be enjoying the sunny SoCal lifestyle, replete with plastic surgery and frequent shopping sprees, real life still manages to find them, even in the land of excess and indulgence.

The glittery and gold-drenched cast is living the good life, riding high and taking some big chances to find happiness in their professional, artistic and romantic lives.  When a scandalous accusation from one of their own shakes the group to the core, lifelong friendships are in jeopardy.  Reza Farahan, Golnesa “GG” Gharachedaghi, Mercedes “MJ” Javid, Asa Soltan Rahmati and Mike Shouhed return along with a sultry new cast member Asifa Mirza.

“Newlyweds: The First Year” Season 2
Premieres Tuesday, March 10 at 10 p.m.
Produced by Monkey Kingdom with Will Macdonald and Eddie Schmidt serving as executive producers, and Sezin Cavusoglu as a co-executive producer.

Four new couples, Samantha Abby and Laura Leigh Abby, Erik Courtney and Nadine Jolie Courtney, Kirk and Laura Knight andToi and Rouvaun Walker are putting love to the test in this groundbreaking series that follows newlyweds for an entire year. From challenging in-laws to fertility struggles and merging complicated lives together, the show will once again document all of the trials and tribulations that can arise in the first year of marriage.

Craig Conover, Kathryn Calhoun Dennis, Cameran Eubanks, Thomas Ravenel, Shep Rose and Whitney Sudler-Smith along with new addition Landon Clements, are taking King Street by storm.  Kathryn and Thomas are busy as new parents, but still finding time to spearhead his campaign for US Senate.  Shep and Whitney are both making a play in the restaurant industry while Craig is now an official law school graduate, and newly married Cameran is making her name as a real estate agent.  Even with their recent successes, relationship tensions, ballots, businesses and babies, are pushing the group to their breaking points.

The Emmy-nominated series returns for season four with superstar real-estate agents Fredrik Eklund, Luis D. Ortiz and Ryan Serhanttaking their professional and personal lives to the next level and the drama is at an all-time high. Luis shifts his business into high gear as he takes on his first new development project.  Ryan is charming his way through some of the biggest deals of his career, but his most important “deal” yet involves his girlfriend, Emilia and living happily ever after. Fredrik is officially New York City’s #1 broker, but he still faces a litany of challenging clients and colleagues, as he and Ryan attempt to work together for the first time.

Scripted Development:
“The One”
Written by Roger Wolfson (“Saving Grace,” “The Closer”) for Universal Cable Productions and Denver & Delilah Films with Charlize Theron and Laverne McKinnon serving as executive producers

A dramatic series that explores what it takes to succeed in the cutthroat world of billionaires and CEO’s through the eyes of those who are often overlooked…the assistants.  A young woman and struggling street artist is hired to be the assistant to a visionary but enigmatic tech genius.  The surprising relationship that forms between them begins to threaten everything the company has built.