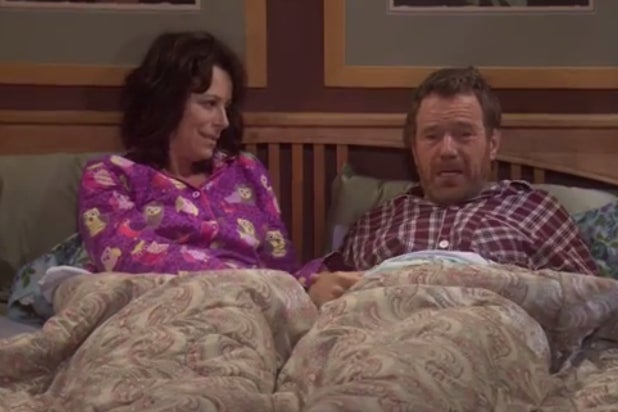 You know that silly “Breaking Bad” finale theory where the AMC drama is all just a part of “Malcolm in the Middle” — well, that came to life. Kind of.

In what was posted as an alternate ending, Bryan Cranston — as Hal from the raising Frankie Muniz sitcom — wakes up from a terrifying nightmare where he was Heisenberg. Cold sweat wasn’t the only liquid running down Hal’s face as he blubbered to “Malcolm” wife Lois (Jane Kaczmarek) about the scary dream. Hal runs through some great “Breaking Bad” character references, referring to brother-in-law Hank (Dean Norris) as looking “like the guy from ‘The Shield'” (Michael Chiklis).

Also read: 17 of the Best in November Sweeps TV: Rhyming, Crossovers and Something ‘Breaking Bad’

When it came to describing Jesse, Hal said, “He always looked like he was wearing his older brother’s clothes.” He added, “He would use the b-word a lot. He would say, ‘Yo, b-word! Yay science b-word!” Which is pretty much about right.

When the calmed-down family man was finally ready to go back to sleep, a “Scarface” reference led to renewed confidence, along with a few more “Breaking Bad.” references. But an attempt at keeping Lois awake did not quite work out like it did for Walter White.

Also posted Saturday was Part 2 of a Season 5 gag reel, highlighting the lighter side of one of the darkest dramas in TV history.

Warning: the fun that ensued may ruin the Hank and Walt garage scene — and plenty more of the series’ best ever — for viewers forever.

Oh and you’ll also be treated to Bryan Cranston‘s naked butt at the end, during the final scene shot. Stick around for that.