Many journalists have pressed Donald Trump and his campaign on the GOP presidential frontrunner’s claim that “thousands and thousands” of New Jersey Muslims cheered while watching the World Trade Center towers collapse on 9/11.

They’ve relied on the basic journalistic premise that a handful of celebrating Muslims — as multiple sources have confirmed — is far different than thousands.

But two stories posted Wednesday on Breitbart.com, including one headlined “Trump 100% Vindicated: CBS Reports ‘Swarm’ On Rooftops Celebrating 9/11,” try to back up the Republican presidential candidate using magical math, generous leaps of the imagination and alterations of Trump’s actual claims.

Editor-at-Large John Nolte, who refused to comment on the record to TheWrap for this story, wrote on Trump’s “100%” vindication by citing a local CBS report published days after the attacks that a Jersey City apartment building was “swarming with suspects” cheering on the roof as the towers went down.

Also Read: Glenn Beck Blasts Breitbart News: 'Are You Void of Anything Decent?'

From all of those news reports, it is perfectly reasonable and nothing close to lying to put together a picture of “thousands.”

For anyone scolded during early journalism days for not being uber-vigilant on numbers, this Trump-supporting math mish-mosh violates journalism 101.

In another story, “9 Pieces of Documentation that Vindicate Trump’s Claim of 9/11 Muslim Celebrations,” Nolte again changed the very nature of the GOP frontrunner’s controversial claims. 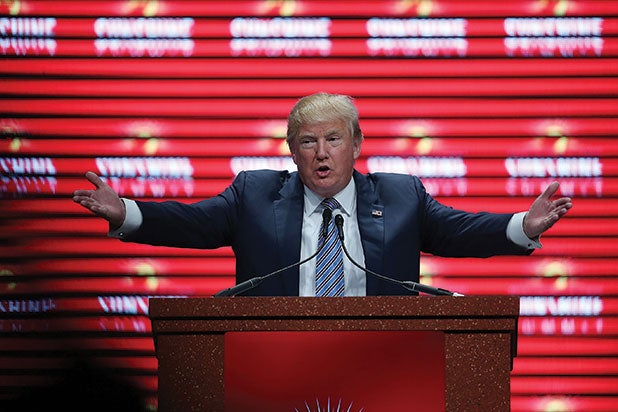 Nolte acknowledged there’s no evidence to support the claim that thousands cheered.

“At worst, though, the Republican frontrunner is guilty of exaggerating,” he wrote before listing a nine items that support the claim — never actually uttered by Trump — that isolated pockets of American Muslims celebrated after the attacks.

He cited former New York Mayor Rudy Giuliani and police commissioner Bernard Kerik, who’ve both acknowledged they heard reports of a small number of Muslims cheering, but not thousands.

Nolte concluded: “The DC Media, however, lied for 14 years and continues to lie today … thanks to Donald Trump, we know the truth.”

Numbers matter, particularly in journalism. The reason media organizations are taking Trump to task isn’t to deflect claims that some U.S. Muslims might have celebrated the 9/11 attacks, it’s to prevent a false notion that thousands did so, which would unjustly paint an inaccurate picture.

Breitbart, who’s been favorable to Trump throughout its campaign coverage, did just that.