The ton is about to swoon: “Bridgerton,” the first scripted series produced by Shonda Rhimes under her mega Netflix deal, has been renewed for Season 2, the streaming service revealed Thursday.

The second season, which will focus on the love life of Anthony Bridgerton (Jonathan Bailey), will go into production this spring, according to Lady Whistledown’s Society Papers (aka Netflix’s on-brand press release), which you can view below.

Based on Julia Quinn’s romance novel series of the same name, the eight-episode first season of “Bridgerton,” which launched Dec. 25, follows Daphne Bridgerton (Phoebe Dynevor), the eldest daughter of the powerful Bridgerton family as she makes her debut onto Regency London’s competitive marriage market.

Hoping to follow in her parents’ footsteps and find a match sparked by true love, Daphne’s prospects initially seem to be unrivaled. But as her older brother begins to rule out her potential suitors, the high society scandal sheet written by the mysterious Lady Whistledown (voiced by Julie Andrews) casts aspersions on Daphne. Enter the highly desirable and rebellious Duke of Hastings (Regé-Jean Page), committed bachelor and the catch of the season for the debutantes’ mamas. Despite proclaiming that they want nothing the other has to offer, their attraction is undeniable, and sparks fly as they find themselves engaged in an increasing battle of wits while navigating society’s expectations for their future.

Earlier this month, Netflix projected viewership of the steamy Shondaland period piece will surpass 63 million households within its first 28 days, the time period Netflix focuses on when sharing its own viewership statistics. That expected tally will make “Bridgerton” Netflix’s fifth-biggest original series launch of all time. Netflix counts a view whenever someone watches at least two uninterrupted minutes of a show or movie.

“Bridgerton” was created by Chris Van Dusen, who also serves as showrunner on the eight-episode drama. Van Dusen executive produces along with Rhimes and Betsy Beers, under their Shondaland banner for Netflix. Directors include Julie Ann Robinson, Sheree Folkson, Tom Verica and Alrick Riley.

Readers can find TheWrap’s interviews with stars Dynevor and Page here and here and with creator Van Dusen here.

Also Read: 'Bridgerton' Star Rege-Jean Page Picks a Side in Daphne and Simon's 'We Were on a Break'-Style Debate (Video) 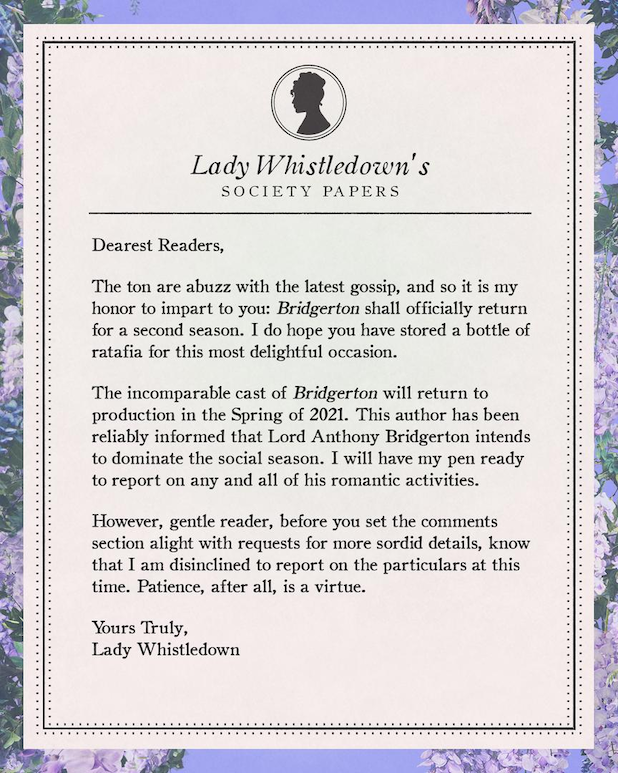