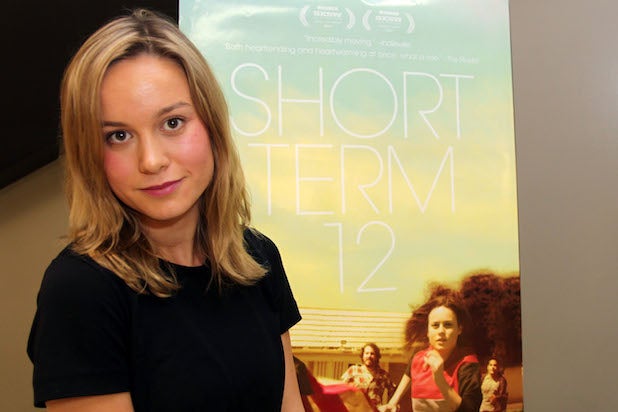 Hot off her breakout role in “Short Term 12,” Brie Larson is in negotiations to star in “The Good Luck of Right Now” for DreamWorks, an individual with knowledge of the project told TheWrap.

“Little Miss Sunshine” filmmakers Jonathan Dayton and Valerie Faris are directing the adaptation of Matthew Quick’s new novel, which hits shelves on Feb. 11. Quick is the author of “The Silver Linings Playbook,” and his latest book was adapted for the screen by Mike White (“Enlightened”).

The Philadelphia-set story follows the intertwined lives of four people, all outsiders in their own right. However, in the wake of grieving over pain and loss in their lives, they come together to form the most unlikely family. Characters include a quirky young man who takes care of his dementia-stricken mother, as well as siblings who believe they were once abducted by aliens.

Larson will play a therapist.

Bruce Cohen (“Silver Linings Playbook”) is producing the film, which DreamWorks production president Holly Bario has said is a priority for the studio.

Larson has been in high demand since earned rave reviews for her performance in “Short Term 12,” which has earned her an Independent Spirit Award nomination. She recently signed on to star opposite Mark Wahberg in a remake of “The Gambler” that Rupert Wyatt is directing for Paramount, which also considered her a finalist for the role of Sarah Connor in its upcoming tentpole “Terminator: Genesis.” Larson is also coming off supporting turns in “21 Jump Street,” “The Spectacular Now” and “Don Jon.”

Larson, who will next be seen alongside Scott Bakula in the Bollywood musical “Basmati Blues,” is repped by the Gersh Agency, Authentic Talent and Literary Management and attorney Robert Offer.

[An earlier version of this story inaccurately reported that Larson would play a librarian.]