Notes written by an investigator from the L.A. County Coroner’s office provide new details in the ongoing investigation into Brittany Murphy’s shocking death. Of particular note is the large number of strong prescription medication found in the actress’ bedroom.

As TMZ reports, notes written by Investigator Blacklock mention that the actress had complained of "shortness of breath and severe abdominal pain" for 7 to 10 days prior to her death on Sunday morning.

Paramedics found a series of prescription drugs on the nightstand in the master bedroom. The medicine bottle were in Murphy’s name, the name of her husband, Simon Monjack, her mother, Sharon Murphy, and an unidentified third party.

Brittany Murphy’s husband, Simon Monjack, spoke to "Access Hollywood" on Monday afternoon about his wife’s surprising death. He said that his wife had been ill recently and was suffering from laryngitis.

"My world was destroyed yesterday," Monjack told the show.

Monjack revealed that Murphy was found unresponsive in the shower by her mother, after having "a regular day."

"[Her mother] Sharon went into the bathroom because she had been in there a long time. Her mom screamed for me and I ran. Then called 911," Monjack said.

Coroners completed the autopsy of actress Brittany Murphy on Monday, but it will take about six weeks for results, assistant chief coroner Ed Winter told TheWrap. There were no signs of foul play, but the cause of death will not be determined until toxicology reports are finalized.

Meanwhile, TMZ is reporting that Murphy had a will when she died. The will was executed, it reports, before her marriage to Simon Monjack, and the actress left her estate to her mother, Sharon Murphy.

Actress Brittany Murphy’s autopsy began about 10 a.m., assistant chief coroner Ed Winter told TheWrap. He said Murphy’s celebrity status had no bearing on the speed of her autopsy. "We take them as they come in," Winter said.

Autopsy reports typically take about a month to six weeks to be made public. "We usually don’t make public preliminary findings," Winter said, "unless there’s something special about the death, like a bullet wound. But there was no sign of trauma here."

Winter did say that prescription medications were found at her home, but "we have not been able to talk to her physician to find out her medication history." He said his office could not say yet whether controlled substances also were discovered.

He also says that Murphy’s family told his office the actress had been ill for several days with "flu-like symptoms" and that she possibly suffered from a diabetic condition.

TMZ is reporting that a large number of various legal prescriptions were found, written not just for Murphy but for her husband and mother.

The site also said that Murphy’s husband, Simon Monjack, had opposed the autopsy.

Actress Brittany Murphy has died, according to the Los Angeles coroner’s office.

The 32-year-old actress, who starred in “Clueless” and with Eminem in “8 Mile,” was declared dead at Cedars-Sinai Medical Center, according to Selena Barrows, an investigator with the coroner’s office.

"We have a preliminary death report of someone with the name of Brittany Murphy," Barrows told TheWrap. The report came from Cedars-Sinai Medical Center at 11 a.m. on Sunday.  (See accompanying article: "Murphy ‘Barely There’ on Recent Movie.’")

TMZ said multiple sources reported that the actress had gone into cardiac arrest and could not be revived on Sunday morning. She reportedly was found unconscious in the shower by her mother.

Barrows said cardiac arrest could mean any number of things, and was not an indication of the cause of death.

Murphy’s family on Sunday night put out this statement: "The sudden loss of our beloved Brittany is a terrible tragedy. She was our daughter, our wife, our love, and a shinning star. We ask you to respect our privacy at this difficult time."

Murphy had recently been fired from the movie "The Caller," which had been shooting in Puerto Rico. No reason was given for the change, but Murphy was replaced by Rachelle Victoria Lefevre of "Twilight," according to a fan site.

The Los Angeles City Fire Department said a 911 call was made at 8 a.m. from the Los Angeles home of Murphy’s husband, Simon Monjack. She was pronounced dead on arrival at Cedars-Sinai Medical Center. 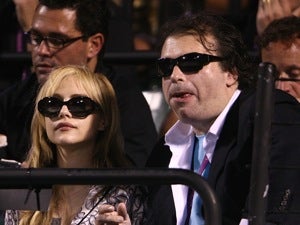 Born in Atlanta, Murphy started acting in regional theater at age 9; by age 13, she had signed with a manager and began appearing in television commercials. Her first roles were on TV series such as “Murphy Brown” and “Parker Lewis Can’t Lose,” which led to her breakthrough film, 1995’s “Clueless.”

She had five movies currently in production, including "Poor Things," with Rosario Dawson; "Shrinking Charlotte," with Kathleen Turner; and Sylvester Stallone’s "The Expendables," with Stallone, Jet Li and Jason Statham.

In 2005, she signed on as the spokesmodel for Jordache Jeans. She has been named to both FHM’S 10 Sexiest Women List, and Maxim’s Hot 100.

In 2006, she released the single "Faster Kill Pussycat," which became a club hit on Billboard’s Hot Dance Club Play chart. She also covered Queen’s "Somebody to Love" and Earth, Wind & Fire’s "Boogie Wonderland" for the film "Happy Feet."

She married screenwriter Monjack (pictured with Murphy at last year’s Sony Ericsson Open) in 2007; before that, she was engaged to talent manager Jeff Kwatinetz, and production assistant Joe Macaluso. In late 2002, she dated Ashton Kutcher, with whom she co-starred in the film "Just Married."