Brittany Murphy’s senseless and tragic death has (of course) devolved into the latest grim Hollywood spectacle. We’ve seen this show before and no doubt will again. It’s that accident you can’t help but rubber-neck and second-guess.

Sound familiar? I’ll spare you the list of famous names that fits this profile. You already know who they are.

And once again we’ll hear colleagues claim to have seen a once-vital, enthusiastic talent screw up a life because of addiction, dysmorphia and insecurity. “We knew something was wrong,” will be the catchphrase of all who claim to have known about her tormented struggles.

So where were these “friends” when the dark side of fame and celebrity grabbed this sweet-faced actor and spun her into the storied celebrity abyss? Didn’t anyone in her circle watch the television show “Intervention”? What prevented family and friends from calling her on the (not-red) carpet?

Granted, an emotionally fragile and allegedly drug-plagued person rarely craves rehab the way they crave their drug. Yet why didn’t those close to her intercede anyway? What’s the worst thing that could have happened? She might have agreed to get help?

Unfortunately, things didn’t quite work out well for this troubled 32-year-old who supposedly went under the cosmetic knife, battled food disorders and took drugs in order to vault onto Hollywood’s A-list. She never quite made it, but apparently died trying.

She might not have nailed the ingénue roles she so desperately seemed to crave, but she was always a scene stealer. Even in her dopey films.

Most of her movie choices may not have been Oscar-worthy, but there was a visceral, deep longing that resonated in her performances, buried deep beneath a childlike persona. The camera loved her, even if she didn’t love herself. 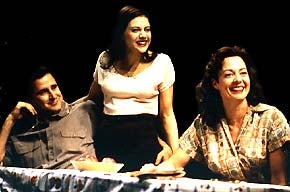 Would you be surprised to learn that not only was she a remarkable film presence, but she once briefly commanded the Broadway stage?

In 1997, this under-rated actor made her Broadway debut playing Catherine in Arthur Miller’s “A View From the Bridge” (left). And I watched her grab the audience and break its heart. Starring Anthony LaPaglia and Allison Janney, this classic was produced by the Roundabout Theater Company.

It was hard to believe this was the same person whose breakout film — "Clueless," an updated version of Jane Austen’s “Emma” — charmed multiple generations. In that classic-made-contemporary, New Jersey native Murphy played a tough New York cookie (with a soft center) who was remade in order to be popular, the “it” girl based on looks and sex appeal.

Harshly prescient and timely, "Clueless" mocks the very path that most wannabe stars (as opposed to actors) are eager to stride. Murphy galloped.

Regardless, Murphy acted with such a depth and transcendently earthy quality, her performance was deemed “exceptional” by the New York Times. She brought a layered nuance that belied her youth.

Holding her own next to the stellar LaPaglia and Janney, Murphy, with her cigarette-hoarse voice, was a wonderful Broadway addition. But Broadway can’t ever compete with Hollywood salaries, so there went another possible Tony winner.

Brittany Murphy was an artist who never realized the truth and beauty of her craft.