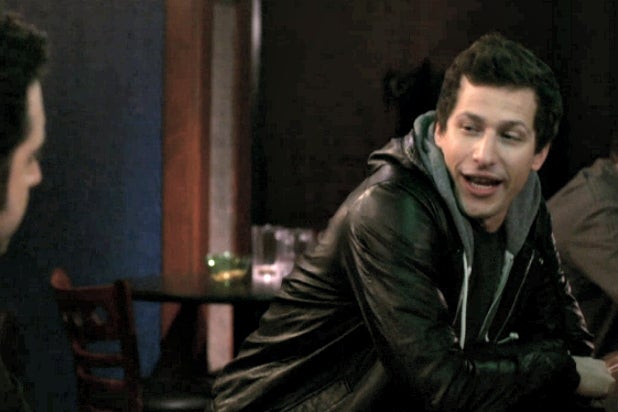 By the end of Tuesday’s “Brooklyn Nine-Nine” season finale, Andy Samberg‘s Det. Jake Peralta was no longer a part of the “Nine-Nine.”

“My name’s Jake Peralta and I just got fired from the NYPD,” the main character drunkenly exclaimed to a fellow bar patron as the episode opened. The details of how that went down were saved for flashbacks.

Peralta is not unemployed, however. The precinct’s top detective will be spending several months (in TV time) undercover, infiltrating an organized crime family. His dismissal was an elaborate setup for the career opportunity. It also gave him an excuse to profess his feelings for Det. Amy Santiago (Melissa Fumero).

Also read: Why You Should Watch ‘Brooklyn Nine-Nine’

“Look, I don’t want to be a jerk, I know you’re dating Teddy and it’s going really well,” Peralta said to Santiago at the end of the episode. “I kind of wish something could happen between us, romantic styles.”

The goofy confession sets up a classic “Will they or won’t they?” for the already announced Season 2. And there’s another one potentially in the works.

A third version of the will they/won’t they appeared in the final Season 1 scene. After a night of heavy drinking, Boyle wakes up in bed with Gina (Chelsea Peretti) — setting up a Season 2 “Did they or didn’t they?” Simultaneous screaming closed out the episode.

Beyond sorting of the “romantic styles,” the ensemble comedy will likely stick with more of the same next season. After all, “Brooklyn Nine-Nine” won the Golden Globe for Best TV Series – Comedy in its first year, with its star Samberg also taking home his own trophy for Lead Actor.

The biggest question for show creators Dan Goor and Mike Schur (both of “Parks and Recreation”) will be how long — if at all — to keep Peralta’s work separate from that of the precinct. That, and one more thing: How does Fox get more people to watch?

As much praise at it gets for Tuesday night laughs, “Brooklyn Nine-Nine” doesn’t exactly light up the Nielsen ratings spreadsheet on Wednesday mornings.