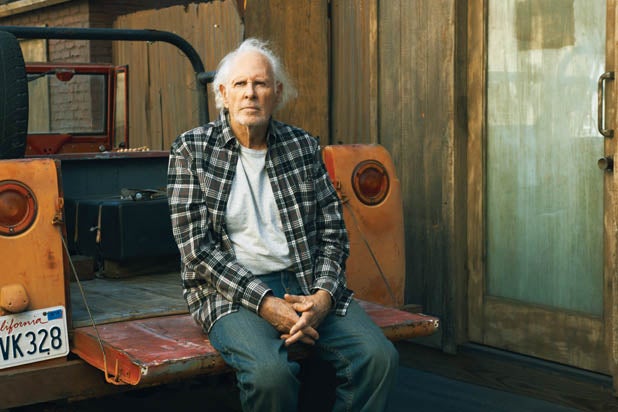 This article first appeared in OscarWrap: The Race Begins. See video of the photo shoot below.

After more than 50 years as an actor — years that have included 80-plus movies, dozens of TV shows, Oscar and Emmy nominations and a reputation as one of the classic character actors of his generation — Bruce Dern didn’t exactly think that his career was over. But as he neared his mid-70s a few years ago, he knew it wasn’t flourishing, either.

“You do it for as long as I have, and you figure that, well, the train hasn’t left, but goddamnit, it’s hard to get on,” Dern, sitting on the Paramount lot, told TheWrap. “You know what I’m sayin’? When all the seats are sold, you figure, well, I’ve got to go back with all the hobos in the boxcar. And I go back there, and there’s a lot of guys I started out with.”

But Dern is now in the first-class car on the train. His quietly devastating performance in Alexander Payne’s “Nebraska” is both a career highlight and a showcase that won him the best-actor award at Cannes and has made him a formidable entrant in a brutally tough category at the Oscars. Woody Grant is a cranky and dementia-addled Montanan stubbornly convinced that the sweepstakes letter he’s received guarantees him $1 million — if he can get to Nebraska to pick up the loot.

Dern knew just what to do with the part once he went to work with Payne, who he’d known casually since the director cast Dern’s daughter Laura in his first movie, 1996’s “Citizen Ruth.” And he knows just how to promote it.

Spending time with Dern is a dizzying and fascinating experience, because the man is a born raconteur who can follow a story about his old pal Jack Nicholson with one about how Quentin Tarantino prepared him for a one-minute role in “Django Unchained” by reciting a feature-quality backstory to his character. He’ll drop names from Elia Kazan to Roger Corman, do a mean Hitchcock imitation (he appeared in the director’s final film, “Family Plot”) and talk about meeting Marilyn Monroe when she sat in on classes at Lee Strasberg’s Actors Studio — and being stunned when she suddenly began crying as the two of them were passed by an older woman on a New York street in the early 1960s.

“That was Greta Garbo, and she didn’t recognize me!” Dern said that Monroe sobbed. (She was placated by his explanation: “She probably recognized you and decided to shine you on. She must have thought, You may be Marilyn Monroe, but I’m fucking Greta Garbo! Get in line.”)

Will Forte, who excels in “Nebraska” as the son who reluctantly agrees to take his father on a road trip to disabuse him of the million-dollar fantasies once and for all, said he experienced the Dern show for about two months.

“The movie is this father-and-son road trip, so we were together for 12 hours a day or longer,” Forte told TheWrap. “I was usually right next to him, and he was telling the best stories. And what should have been a very scary, intimidating experience was just a magical time.” Added June Squibb, who plays Woody’s long-suffering wife, “He’s one of a kind, God knows.”

But while the wild and wooly tales from Dern’s life are the most entertaining part of his story, at the core of what he has to talk about is a quiet kind of redemption, a chronicle of the way he rose to an opportunity that came along decades after opportunities had become scarce. As enticing as it is to lose oneself in Dern’s past, the heart of his story is his present.

“I was stunned when I got this role,” he said matter-of-factly. “I’ve had wonderful opportunities before, but I’ve never been really the linchpin of a movie. I remember my agent was on a plane once with Marty Scorsese, and he said, ‘How come you and Bruce never really hooked up together?’ Because at one point there was talk that I was going to be in Mean Streets. And Marty said, ‘When you use Bruce Dern, he should be the linchpin of your movie. Otherwise you’re wasting an opportunity.’

“This time, I don’t think it’s an opportunity wasted,” Dern said with a small grin. “I sure as hell hope not.”

One of the key scenes in “Nebraska” comes fairly late in the film, when Woody and his wife and two sons (Forte and “Breaking Bad’s” Bob Odenkirk) wander through the abandoned house in which he grew up. Dern doesn’t say much in the scene, but his performance is wrenching, particularly when he looks around his parents’ old bedroom and quietly remarks that he would have been whipped if he’d been caught in that room as a child.

“He just knocks me out when I see him walking through the old house in that scene,” said Bob Nelson, who wrote the script. “To see him in scenes where he can convey emotion like he did in Coming Home without saying a word–I expected him to be great, and he did what I expected and even more.”

For Dern, the scene brought up unavoidable memories of a strict childhood in Chicago and a father with whom he was never close. The elder Dern, an attorney, was friends with the likes of presidential candidate Adlai Stevenson and First Lady Eleanor Roosevelt (they were his godparents), while his mother was the niece of poet Archibald MacLeish. Holiday dinners could include MacLeish, Stevenson, Ezra Pound and Robert Frost, and the younger Dern was taught to know his place. “They had game,” he said, “and little Bruce didn’t have game.”

So when the scene in “Nebraska” came along, Dern knew where to find the emotion. “Thomas Wolfe once said, ‘You can’t go home again,'” he said. “But you must go home again. You must go and see who you are and what you came from.”

He paused. “I remember when I got my star [on the Hollywood Walk of Fame], I never plugged my mom and dad, because they stood in the way of me doing what I’m doing now. My dad didn’t like what I was doing, but he died right away when I started to act. And my mom was never thrilled with what I did. She said she couldn’t ask her father to watch any of the TV things I did, or take him to any of my movies. And the last straw was when she said, ‘Oh, I see you’re in another Western. God, Bruce, it’s an era gone by, and you’re not going to be Jimmy Stewart or Henry Fonda or John Wayne or any of those guys. Why don’t you give it up?’

“I said, ‘Well, first of all, it isn’t a Western.’ And she said, ‘Oh, of course it is. The title  is “They Shoot Horses, Don’t They?'” Three years after he made that film (which dealt with marathon dancing contests in the Depression, not with cowboys), Dern’s mother died while he was making “The King of Marvin Gardens,” one of his most admired films. “She never really got to see the essence of what my career could become,” he said.

That career would include a Western in which Dern became the only person to kill John Wayne onscreen (“The Cowboys”), a thriller in which he blew up the Super Bowl (“Black Sunday”), a sci-fi drama that introduced little robots five years before “Star Wars” brought us R2D2 (“Silent Running”), a Francis Ford Coppola-written version of “The Great Gatsby,” a Vietnam drama for which he received an Oscar nomination (“Coming Home”) and, more recently, an Emmy- nominated run on the HBO series “Big Love.” For the most part, the films showcased Dern as a character actor who specialized in psychopaths and misfits, and a guy who knew how to jazz up a scene with an arsenal of quirks that became known as Dernsies.

Jack Nicholson coined the phrase in 1971, when Dern enlivened a simple walk down a hotel hallway in “Drive, He Said” with a couple of finger snaps that weren’t on the page. Nicholson, who was directing the film, sidled up to Dern and announced, “That was a Dernsie.”

“I liked to lay down shit that’s not in the script,” Dern said. “They’re embroidery. Every actor does ‘em, but mine got a name. And a lot of directors, like Hal Ashby on “Coming Home,” have said, ‘Hey, gimme a Dernsie here.'” (One of the Dernsies from that movie came when Dern’s character, a Marine just back from Vietnam, flashed the peace sign to a group of demonstrators and then quickly turned it into the bird.)

But Alexander Payne didn’t ask for Dernsies on “Nebraska.” In fact, he warned Dern on the first day of shooting that he wanted something subtler than the actor was accustomed to delivering. “He and Phedon Papamichael, the cinematographer, came up to me, and Alexander said, ‘I wonder if you’d do something for me.’ And I said, ‘What’s that?’ He said, ‘Let us do our jobs. By that, I mean don’t show us anything. Let us find it.’

“That was the first time I’d heard that in my career. I hugged him and said, ‘I’m your tool. Let’s go.'”

The result is a performance with no flash and a character who seems utterly real.

After a recent screening, Jeremy Irons told Dern, “You make it look so easy. You can’t see the work–it’s just, you’re that guy.” The compliment meant a lot to an actor trained in the Method. “When you begin with Strasberg and [Elia] Kazan, that’s the goal,” said Dern. “Maybe this is bragging, but I feel this is as good as I’ve done, because the role is the most complete role I’ve ever had. There was a lot about my performance that had to do with showing Alexander that he didn’t make a mistake, that I could be the guy he wanted me to be.

“I’m sure I’ve let a lot of directors down and a lot of movies down by pushing too hard. I wanted to make sure I had good moments or good scenes, but those weren’t complete performances. I’m not saying this is a great performance, but I would say that it’s a complete performance. From beginning to end, I think the character is there.”

In the future, he added, “I will demand of myself that I will take nothing less than what I’ve done in this movie in terms of honesty and reality and leading with the heart. I will make everything honest.

Here’s a video from the photo shoot on the Paramount lot, and at TheWrap’s screening of “Nebraska”: