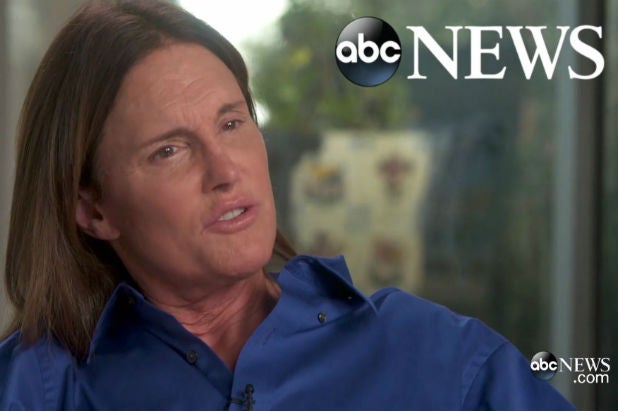 Bruce Jenner confirmed to Diane Sawyer on Friday’s ABC “20/20” special that, “Yes, I am a woman,” and his highly anticipated reveal quickly prompted a positive response from GLAAD, the nation’s lesbian, gay, bisexual and transgender (LGBT) media advocacy organization.

“Today, millions of people learned that someone they know is transgender,” GLAAD President & CEO Sarah Kate Ellis said in a statement to TheWrap. “By sharing this story, Bruce Jenner has shined a light on what it means to be transgender and live authentically in the face of unimaginable public scrutiny.

“Though Jenner’s journey is one that is deeply personal, it is also one that will impact and inspire countless people around the world,” Ellis said.

“I’ve been thinking about this day forever and what I should do with my life … how do I tell people what I’ve been through? Today is that day, and I get to choose,” Jenner said during the sit-down with Sawyer.

During the interview, the former Olympian — who has been married three times, including to reality matriarch Kris Jenner — went on to clarify his sexuality, stressing that he has always been attracted to women: “You are going back to the sex thing, and it’s apples and oranges. Sexuality is who you’re attracted to, who turns you on — gender identity is who you are, what is in your soul.”

As far as his sexual preferences, Jenner maintained, “I’m not gay.”

“Every transgender person’s journey is unique, and by choosing to share this story, Bruce Jenner adds another layer to America’s understanding of what it means to be transgender,” Nick Adams, GLAAD’s Director of Programs, Transgender Media, explained in the organization’s statement.

“We hope that after hearing Jenner’s story, people will want to learn more about the issues and challenges facing their transgender friends, co-workers, and family members. Stories like these will help create a world in which everyone can express their gender identity without fear of discrimination and violence.”