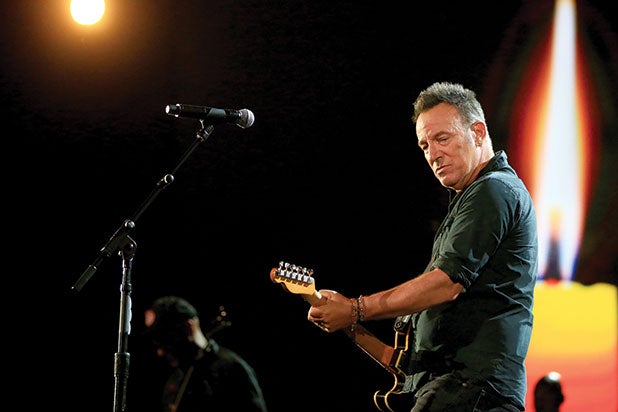 Colin Kaepernick has sparked divided opinion since he first sat during the national anthem in August to protest racial injustice, and while he doesn’t outright say he agrees with it, Bruce Springsteen does admire the San Francisco 49ers QB’s courage.

“Athletics is a difficult place to make political statements,” the Boss told Rolling Stone in an interview released Wednesday. “There was the Olympics in the ’60s, and obviously Muhammad Ali. But sports is such an escapist field. I think when politics or personal expression is injected, it rankles people more than in other fields. But we’re in a time where there isn’t any place where these issues can be excluded.

“I admire Kaepernick, but it’s a very difficult field to be outspoken in.”

When it comes to the Black Lives Matter movement as a whole, the “Born in the USA” singer said, “Well, it’s all chickens coming home to roost.

“These are issues that have been ignored or hidden, and due to modern technology and the availability of cellphone cameras and constant video feed, these things are coming to the surface,” the 67-year-old rock legend said. “Black Lives Matter is a natural outgrowth and response to the injustices that have been occurring for a very long time in the United States.”

Having recently learned that the man about whom Springsteen wrote his 1995 hit “Youngstown” is a Trump supporter, the musician was naturally asked what he thinks of the GOP presidential candidate — and his answer pulled no punches.

“The republic is under siege by a moron, basically. The whole thing is tragic. Without overstating it, it’s a tragedy for our democracy,” Springsteen told the magazine.

“The ideas he’s moving to the mainstream are all very dangerous ideas — white nationalism and the alt-right movement. The outrageous things that he’s done — not immediately disavowing David Duke? These are things that are obviously beyond the pale for any previous political candidate. It would sink your candidacy immediately.

The musician, who has sold more than 64 million albums in the U.S. and is best known for his work with the E Street Band, is currently promoting his new autobiography, “Born to Run,” which Rolling Stone described as “a psychological recipe for the creation of a self-flagellating superstar.”

Springsteen recently set the record for the longest U.S. concert with a marathon performance in Philadelphia, but don’t expect him to be playing in North Carolina any time soon. The Boss canceled his Greensboro, North Carolina, show in April after the state passed HB2, officially known as the Public Facilities Privacy and Security Act.

Click here for the full interview with Rolling Stone.