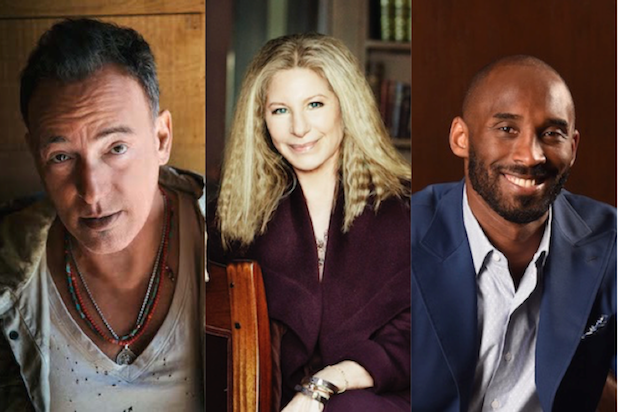 Those artists are part of a variety of interviews, panels and screenings during the festival, which begins on April 19 and runs through April 30 in New York City.

Springsteen will be part of the Tribeca Talks: Storytellers program, and will discuss his musical career with actor and longtime friend Hanks on Friday, April 28 at the Beacon Theatre.

Other participants in that program are Bryant, who recently collaborated with veteran animator Glen Keane on a short film inspired by his retirement from basketball, and who will join Keane in discussing the film with former athlete and TV host Strahan; Streisand, who will discuss her career with director Rodriguez; rapper Common, who screen an extended version of his “Letter to the Free” video, and then speak to director/screenwriter Nelson George and give a live performance; and Lena Dunham and Jenni Konner, who will discuss their careers as their TV series “Girls” comes to an end.

The Tribeca Talks: Directors series will include director Favreau speaking to actress Johansson; Oscar-winning filmmaker Inarritu; and writer-director Baumbach in a conversation moderated by Hoffman.

“The Hurt Locker” and “Zero Dark Thirty” Director Bigelow will join Imraan Ismail to discuss their collaboration on the virtual reality documentary “The Protectors: A Walk in the Ranger’s Shoes,” which will have its premiere after the conversation on April 22.

And Tribeca Talks: Podcasts will consist of live podcasts from comedian and actor Gilbert Gottfried and others.

Tickets for the Springsteen/Hanks conversation will go on sale at Ticketmaster on Tuesday, March 21, while tickets for other Tribeca Talks events will be available at the festival website on March 28.

Other information is available at www.tribecafilm.com.