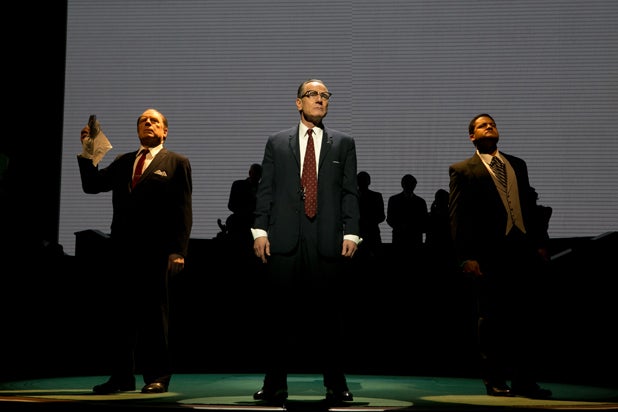 “Breaking Bad” star Bryan Cranston will return to television for “All the Way,” an HBO Films adaptation of Robert Schenkkan‘s Tony-winning play that will be executive produced by Steven Spielberg.

“All the Way” follows Cranston’s President Lyndon Johnson as he struggles to pass the 1964 Civil Rights Act and deal with the escalation in Vietnam. It won this year’s Tony for Best Play, and Cranston won for Best Actor. It ended its Broadway run at the end of last month.

Spielberg, who saw the play at least twice, has been weighing an adaptation for some time. Like his 2012 “Lincoln,” it focuses on the arm-twisting a president must do to pass legislation.

The role requires Cranston to alternate between Johnson’s sneaking attacks of self pity and scenery-chewing moments of threatening and cajoling recalcitrant senators. Johnson is contained only when he buttons up his passions in order to appear presidential.

Schenkkan will adapt the play for HBO. The Pulitzer Prize winner for “The Kentucky Cycle” worked previously with Spielberg on HBO’s “The Pacific.”

Cranston, who won three lead acting Emmys for “Breaking Bad” and is nominated this year for a fourth, previously appeared in Spielberg’s “Saving Private Ryan.”

In addition to the Tonys, “All the Way” has received Outer Critics Circle, Drama League and Drama Desk awards.