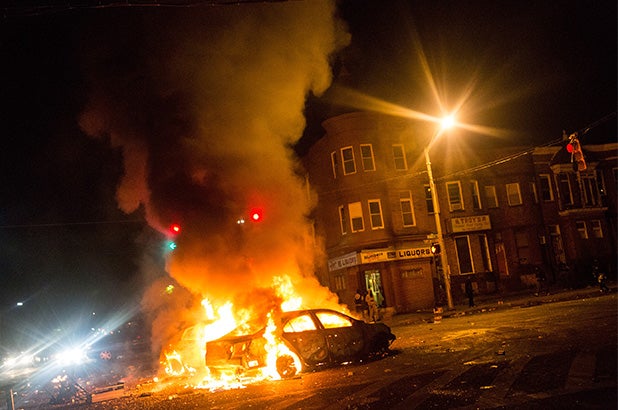 During the 10 p.m. eastern hour on Monday, the cable news networks were flooded with live footage from the streets of Baltimore as protesters torched  buildings, set police cars on fire and threw bricks at officers.

After getting caught up in last year’s riots in Ferguson, Missouri, “CNN Tonight” host Don Lemon reported from the Maryland city as the unrest increased following the funeral of Freddie Gray, a young black man who died on April 19 after suffering severe spinal injuries while in police custody.

Lemon and fellow CNN reporters including Miguel Marquez, Joe Johns and “New Day” host Chris Cuomo were live from Baltimore as cars burned behind them and police officers lined up in riot gear, unable to quell the looting and vandalism.

At the same hour, Fox News correspondent Leland Vittert reported from the ground for “Hannity.” Tear gas sparked fires in the streets as Vittert compared the crisis in so-called “Charm City” to trouble spots in the Middle East. Additional live news coverage from Fox News Channel was broadcast during “The Kelly File” at 9 p.m. and midnight ET and a special live hour with Shepard Smith on “The Fox News Deck” at 11 p.m. ET.

MSNBC’s “The Last Word with Lawrence O’Donnell” continued that network’s coverage with harrowing scenes of unrest, and interviews with local officials.

Earlier on Monday, Lemon alerted viewers that he was on his way to the troubled area.

Photo: On way to #Baltimore. See you on @cnntonight at 10pET. #freddiegray #baltimoreriots (at… http://t.co/4kB4hUvHeL

By that evening, 15 police officers had been injured in the clashes with rioters. Gov. Larry Hogan called in the National Guard and declared a state of emergency. A week-long curfew was also imposed beginning Tuesday from 10 p.m. to 5 a.m., Baltimore Mayor Stephanie Rawlings-Blake announced, and schools will be closed Tuesday.

A hot topic of conversation across all the networks was why the mayor didn’t start the curfew immediately instead of waiting 24 hours.

Meanwhile, Gray’s family spoke to the media from the church where his funeral was held that afternoon and his twin sister, Fredricka, pleaded for the unrest to end. “My family wants to say, can you all please, please stop the violence?” she said. “Freddie Gray would not want this.”

Anita Bennett and Jordan Chariton contributed to this report.