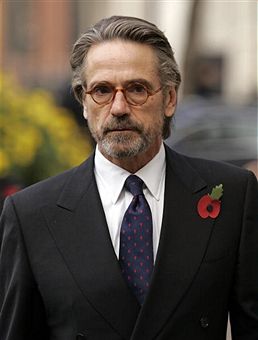 • In May Kevin Spacey was among the first actors to lead the parade of talent that comprises the cast of J.C. Chandor's Wall Street thriller "Margin Call" and today, another Academy Award winner has been added to the impressive ensemble.

Jeremy Irons ("Reversal of Fortune") will play the CEO of a financial firm in the midst of some day-long drama, the actor's publicist has confirmed to TheWrap.

The film follows key players at a prominent investment bank during the early stages of the 2008 financial crisis.

I always enjoy Irons on screen, as he never fails to bring something interesting to the characters he plays, particularly his delicious villains Scar ("The Lion King") and Simon Gruber ("Die Hard With a Vengeance"). We'll see if his "Margin Call" character is similarly sinister …

Max Irons (Jeremy's son), Shiloh Fernandez, Lukas Haas, Julie Christie, Gary Oldman and Michael Hogan co-star in the medieval movie, which is set in a village that is being terrorized by a werewolf.

Call me crazy, but for some reason, I think this werewolf movie will actually deliver the goods. I'm encouraged by a few things. 1. Gary Oldman is awesome. 2. Julie Christie doesn't just agree to be in any movie. 3. Catherine Hardwicke is better than the "Twilight" franchise 4. DLJ's "Orphan" probably can't be called a "good" movie by any generous definition of the word, but there's no doubt that, however implausible, it was insanely entertaining and fairly unforgettable. 5. Former "Big Love" star (well, until the series finale, I'm sure) Amanda Seyfried is beauty incarnate … and a pretty damn good actress too.

And, oh yeah, Virginia Madsen is a sweet addition to this cast too. I loved her in "Sideways" but more importantly for scare fare such as "Red Riding Hood," she was great in "Candyman."

Madsen recently starred in "The Haunting in Connecticut" and can currently be seen on ABC's dramedy "Scoundrels." She is represented by CAA.

The 37-year-old "Law & Order" veteran evidently replaces Emily Mortimer, whose reason for departing the production remains unclear — no creative differences or scheduling conflicts from her camp. To be honest, she's probably better than this Lautner vehicle, but then again, the movie co-stars Alfred Molina and Sigourney Weaver, so perhaps I'm wrong about that. I'm very curious to see what stellastarr* singer Shawn Christensen has cooked up, with a little help from Hollywood veteran Jeffrey Nachmanoff. 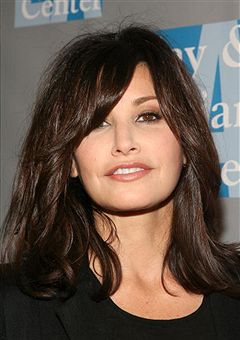 • The gorgeous Gina Gershon will star opposite Danny Glover and Robert Patrick in the indie film "Five Minarets in New York," according to the Hollywood Reporter.

Gershon will play Maria, the wife of a Turkish scholar who is arrested by federal authorities after being wrongfully accused of a crime.

I've gotta say, this must be one smooth Turkish scholar if he's getting Gershon to marry him. I mean, how many Turkish scholars get to marry someone who was in both "The Insider" and "Showgirls?" See my point?

All kidding aside, this one won't be playing on 3000 screens, but I like the B-plus-level cast it's assembling, not that there's anything wrong with that.

The movie marks the English-language debut of Turkish filmmaker Mahsun Kirmizigul ("I Saw the Sun").

Gershon currently stars in Taylor Hackford's "Love Ranch." She is represented by APA.

Glover recently starred in "2012" and the "Death at a Funeral" remake. He is represented by ICM.

Patrick recently co-starred in Grant Heslov's "The Men Who Stare at Goats." He is represented by Paradigm.

Written by Ali Rushfield and Jenni Konner, the story follows two "best friends forever" who decide to split up and go their separate ways.

Sounds familiar, but it'd be funny to see Permut go down the Michael Cera-in-"Youth in Revolt"-route again and cast one actress to play both roles.

There's no director attached yet, but Permut's VP of production Steve Longi will co-produce, while Kim and Eric Tannenbaum will exec produce, having originally set up the project at Disney. Production on "B.F.F." is scheduled to start in September.

Permut is developing two biopics — one about John DeLorean, and the other about late comic Sam Kinison. He's also been raising independent financing for a "Chippendales" movie to be directed by Tony Scott.

Rushfield and Konner had something to do with a couple of TV shows that I've never watched, but what makes them super cool in my book is that they used to work on "Undeclared." They are represented by UTA.

• And finally, Terrence Malick's "The Tree of Life" has been rated PG-13 by the MPAA "for some thematic material." What are those themes? What is the material? OMG! OK, remember to breathe.

Of note is the fact that the picture's distributor is apparently listed as Cottonwood Pictures (actually the production company) instead of Apparition, which recently lost savvy exec Bob Berney.

The release date is still TBD and no running time was available. However, based on the extreme length of "The New World" and "The Thin Red Line," I bet it will run longer than "Jonah Hex." Zing!