Donald Trump would probably be delighted if Jim Acosta — the CNN correspondent he called “a terrible person” on Wednesday — stopped covering him. He did after all revoke Acosta’s press credentials earlier today. But media experts are split on whether the insult created such a conflict of interest that Acosta should move off the White House beat.

“CNN should be ashamed of itself having you working for them,” Trump said to Acosta during a briefing Wednesday. “The way you treat Sarah Huckabee is horrible. The way you treat other people are horrible. You shouldn’t treat people that way.”

By Wednesday night, things had escalated: Trump press secretary Sarah Huckabee Sanders announced on Twitter that Acosta’s “hard pass” credential had been revoked, accusing him of “placing his hands on a young woman just trying to do her job as a White House intern.”

And in its own statement, CNN accused Sanders of making “fraudulent accusations” and called the White House’s move to revoke Acosta’s credentials “a threat to our democracy.”

Trump’s insult brought vigorous support for Acosta from CNN, but also calls from the right for Acosta to move on. Acosta has repeatedly criticized Trump officials, including spokeswoman Sarah Huckabee Sanders, and taken Trump to task for calling the news media, including CNN, the “enemy of the people.”

“If Acosta’s job is to be an objective journalist, he’s terrible at it. If it’s to make headlines about Jim Acosta, he’s terrific at it,” Daily Wire founder and editor-in-chief Ben Shapiro told TheWrap. “Of course CNN should replace him — he has not elicited a productive answer from the White House in months, he’s lending credence to the chief criticisms of CNN, and he’s reveling in the attention he receives.”

“This president’s ongoing attacks on the press have gone too far. They are not only dangerous, they are disturbingly un-American,” the network said in a statement.
“While President Trump has made it clear he does not respect a free press, he has a sworn obligation to protect it. A free press is vital to democracy, and we stand behind Jim Acosta and his fellow journalists everywhere.”

Wednesday’s clash came as Acosta pressed Trump about the so-called migrant caravan, challenging the president’s assertion that it is “an invasion” of the United States.

Trump told Acosta: “I think you should let me run the country, you run CNN, and if you did it well, your ratings would be much better.”

Acosta tried to ask a follow-up question as a White House aide tried to take away the microphone. Trump chided Acosta: “That’s enough.”

The president then added: “You are a rude, terrible person. You shouldn’t be working for CNN.”

When NBC’s Peter Alexander began a question by defending Acosta as a “diligent reporter,” Trump replied, “I’m not a big fan of yours, either.”

Playboy columnist Art Tavana said the clash between Trump and Acosta resulted from both Acosta’s “self-aggrandizing activism” and Trump’s “Hindenburg-sized ego,” which “won’t allow him a moment of humility to conduct himself in a presidential manner and quiet the ‘fake news’ twaddle.”

Tavana said the White House press corps would benefit from “more moderate conservatives and levelheaded liberals”  in its ranks.

But Jeff Jarvis, director of the Tow-Knight Center for Entrepreneurial Journalism at the Craig Newmark Graduate School of Journalism, said Acosta was doing exactly what journalists should do.

“Of course, he can still do his job. In that clip he is doing his job,” Jarvis told TheWrap. “That’s called reporting. I wish we saw a hell of a lot more of it.”

“In trying to do his job, which is to ask sometimes difficult questions of whomever is president, he has exposed the level of hostility, evasion and dissembling to which the current president can descend,” Stephens said. 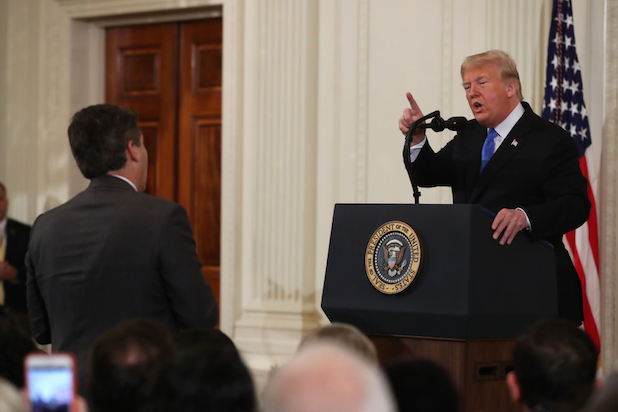 In June, Acosta pressed the president several times on whether he’d stop calling the media “the enemy of the people.” Trump has blasted Acosta and CNN on multiple occasions as “fake news.”  Acosta called Trump “a dishonest, deceptive person” at a CNN panel discussion in New York last month. He has also called out Sarah Huckabee Sanders on multiple occasions, saying the White House press secretary doesn’t always “state the facts.”

“I wouldn’t put productive and a Sarah Sanders briefing in the same sentence,” Acosta said at the CNN panel event last month.