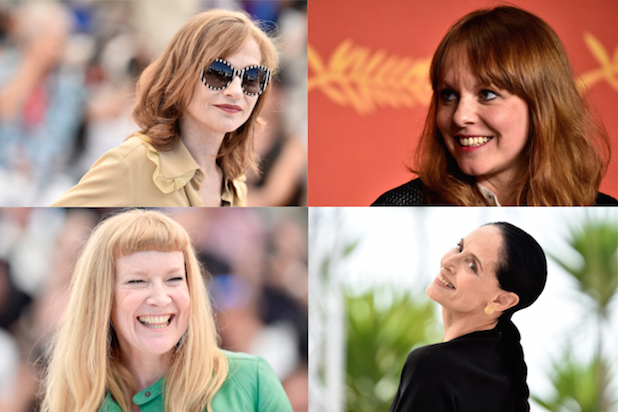 The Cannes Film Festival’s awards will be handed out on Sunday, and for a change women are expected to be directly in the spotlight.

In the 69-year history of the festival, no woman has been the sole recipient of the Palme d’Or, the award traditionally given to the director of the year’s top film. Jane Campion took the prize for “The Piano” in 1993, but she shared the award with director Chen Kaige, who tied for the Palme with his “Farewell My Concubine.” And in 2013, the jury specified that the Palme for “Blue Is the Warmest Color” should go not only to director Abdellatif Kechiche, but to actresses Lea Seydoux and Adele Exarchopoulos as well.

Otherwise, it’s been 67 years and 67 male Palme d’Or winners, with few opportunities for women to win the top prize. But at this year’s Cannes, two of the three female directors in the main competition are among the frontrunners for the Palme: German director Maren Ade delivered the most critically lauded film of the festival with her family dramedy “Toni Erdmann,” while Brit Andrea Arnold‘s raw travelogue “American Honey” drew wildly mixed reactions, but is considered a real contender because of the ambition and energy of its filmmaking.

As the festival enters its final weekend, all 21 contenders for the Palme have screened, with the final entries being Paul Verhoeven‘s transgressive “Elle,” Asghar Farhadi‘s generally well-liked drama “The Salesman” and Sean Penn‘s reportedly disastrous “The Last Face.”

None of the three seem likely to contend for the top prize, which means that “Toni Erdmann” may remain the favorite (though the jury might think that its rampant humor makes it too light) and “American Honey” is a real player if the jury headed by director George Miller wants to be adventurous.

(Both films, coincidentally, are two hours and 42 minutes long, which seemed to be a bigger problem for viewers of “American Honey” than “Toni Erdmann.”)

Kleber Mendonca Filho’s rough-hewn “Aquarius” has lots of admirers as well, though it seems likelier that the jury would want to reward lead actress Sonia Braga for a bold, lived-in performance as an elderly woman insisting that she not be treated like a societal cast-off.

And that brings up a couple of other points: First, the Cannes jury is typically instructed not to give any of its other awards to the film that wins the Palme d’Or – so if it decides to give the best-actress award to Braga, say, that’ll likely cut “Aquarius” out of the big race.

And second, the single most competitive race at the festival this year is not for the best-film Palme d’Or, but for Cannes’ best actress.

Braga is formidable (and TheWrap’s Ben Croll considers her a near-lock for the award), but if the jury doesn’t give “Toni Erdmann” the top prize, it’d be hard pressed not to consider Sandra Huller for the actress prize for her role as a tightly-wound corporate exec forced to loosen up by her prankster father.

But newcomer Sasha Lane is vibrant as a free-spirited young woman in “American Honey”; and Ruth Negga is heartbreaking as a woman in an interracial marriage in the South in the 1960s in Jeff Nichols‘ “Loving”; and Isabelle Huppert won raves for a fierce performance as an assault victim in Paul Verhoeven‘s “Elle”; and Kristen Stewart survived the boo-birds who initially mocked Olivier Assayas‘ “Personal Shopper” to win praise.

You could also throw in Hayley Squire in Ken Loach‘s “I, Daniel Blake,” and Emma Suarez and Adriana Ugarte in Pedro Almodovar‘s “Julieta,” and Marion Cotillard for “Mal de Pierres,” the most conventional of the three Cannes competition films directed by women, and Adele Haenel in the Dardenne brothers’ “The Unknown Girl,” and Jaclyn Rose in Brilliante Mendoza’s gritty “Ma’ Rosa,” and Elle Fanning for gamely surviving Nicolas Winding Refn‘s “The Neon Demon” …

This was a year in which almost all of the standout films at Cannes featured vibrant, unforgettable female characters, and picking a single winner will be one of the most difficult tasks facing Miller’s jury.

On the best-actor side, the pickings are perhaps slimmer. The two clear standouts are British comedian Dave Johns for his quiet performance as the title character in “I, Daniel Blake,” the story of an aging worker trying to navigate a brutal bureaucracy, and Adam Driver with his understated role as a melancholy bus driver and occasional poet in Jarmusch’s beautiful “Paterson.” Either of them would be richly deserving.

Other awards-worthy male performances include Peter Simonischek in “Toni Erdmann” (though that film seems far likelier to be recognized for director Ade or actress Huller), Adrian Titieni in “Graduation” and Shahab Hosseini for “The Salesman.”

As for the other Cannes awards — best director, best screenplay, grand prize and jury prize — they’re typically spread among films that didn’t win the Palme but had admirers on the jury. Park Chan-wook seems a strong contender for directing for “The Handmaiden,” while admiration for “Loving” or “Elle” could also surface here.

Though some Cannes-watchers wondered if the flurry of big titles that screened on the last two days of the festival – “The Neon Demon,” “The Last Face,” “The Stranger” and “Elle” – would have a big effect on the Palme d’Or competition, it now seems unlikely that there were any real game-changers in that group.

But they did alter the race for the festival’s worst film. You could call it the Palme Dog, except that there’s already an award with that name, which goes to the festival’s best canine performance and this year went to Nellie, the bulldog in “Paterson.”

But for the other kind of dog, the festival’s homestretch brought some real contenders. There was “Personal Shopper,” which got booed in its first screening, applauded at its premiere and mostly ignored at its final Cannes screening; then Xavier Dolan‘s bitch-fest “It’s Only the End of the World,” which found a few champions but was mostly dismissed as unbearable when it debuted on Wednesday; and then “The Last Face,” which emerged on Friday as the hands-down winner.

If that entirely unofficial award is locked up, though, the official Cannes awards that winners can brag about winning are now in the hands of nine jurors, whose deliberations are almost entirely unpredictable. It’s up to Miller, actors Kirsten Dunst, Donald Sutherland, Valeria Golino, Mads Mikkelsen and Vanessa Paradis, directors Laszlo Nemes and Arnaud Desplechin and producer Katayoon Shahabi.

Ben Croll contributed to this report.