There’s an occasional tendency among audiences, film critics and acquisitions executives to get overly enthusiastic about Sundance movies, leading to disappointment when the film is revisited away from the altitude and the atmosphere of the festival. (Not that those first impressions can’t always be trusted – I loved “Boyhood” just as much at sea level as I did in Park City.)

I’ll reserve final judgment on “Captain Fantastic” when I see it again off the mountain, but at Saturday night’s premiere, I found myself laughing and crying through the tale of Ben (Viggo Mortensen), who raises his six children off the grid and away from civilization’s clutches. By day, the kids hunt and exercise and train for survival; by night, they sit around the campfire reading quantum theory and Dostoevsky before jamming out on guitars, harmonicas and other instruments.

This Eden cannot last, of course; the kids learn the sad news that their mother has committed suicide, and Ben’s in-laws (Frank Langella and Ann Dowd) threaten him with arrest if he shows up at the funeral. Nevertheless, Ben and the kids load up their bus (named “Steve”) and drive from the Pacific Northwest to New Mexico to see her off.

Writer-director Matt Ross (“28 Hotel Rooms”) creates a charmingly eccentric family dynamic for these outsiders. The kids can discuss the Bill of Rights and “Lolita” with ease, and have secret conversations in Esperanto, but they’re agog at the sight of a first-person-shooter video game. Eldest son Bodevan (George MacKay) can single-handedly slay a deer, and he’s smart enough to have gotten into the best colleges, but he’s so addlepated by his first time flirting with and kissing a girl that he immediately proposes marriage.

(In a neat bit of synchronicity, MacKay’s “Pride” co-star Ben Scherzer has a scene in Sundance entry “Goat” in which he spoils a booty call by telling the girl, “I think I love you” mid-coitus.) 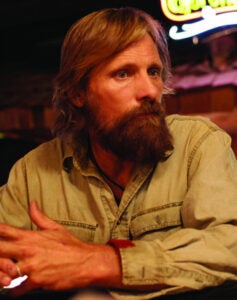 Just when you think the film is smugly poising Ben’s rebel-outsider mentality against the close-mindedness of his late wife’s parents, “Captain Fantastic” steps up and acknowledges that some of Ben’s parenting techniques might actually be endangering his own children, and it makes the case that home-schooling and living off the land can be great and valuable, but socialization skills can come in handy as well.

The film looks great, whether the characters are in the forest primeval or surrounded by mini-malls and golf courses – the great Stéphane Fontaine (“A Prophet”) is director of photography – and editor Joseph Krings (“Drunk Stoned Brilliant Dead”) keeps the story moving along at a brisk clip, keeping the audience from feeling like they’re watching yet another Sundance movie about an odd family on a road trip.

As an actor himself (“Big Love,” “The Last Days of Disco”), Ross is unsurprisingly adept at working with actors, and the performances he elicits from his young actors are particularly noteworthy. (In addition to MacKay, Ben’s brood is played by Annalise Basso, Shree Crooks, Samantha Isler, Nicholas Hamilton and Charlie Shotwell.) Langella and Dowd find ways to make what could have been one-note characters rich and empathetic, as they grieve their lost daughter.

The movie really belongs to Mortensen, who allows Ben to be exasperating, arrogant and impatient but also warm, loving and caring. He’s a tough but adoring father, a grieving widower and an angry defender of his wife’s final wishes, and Mortensen plays all these notes and more with subtlety and grace.

And again, maybe my feelings about “Captain Fantastic” will change upon a second, future viewing, but for now, it provided me with the sense of discovery and elation that sends film lovers from around the world on a pilgrimage to Utah every year.