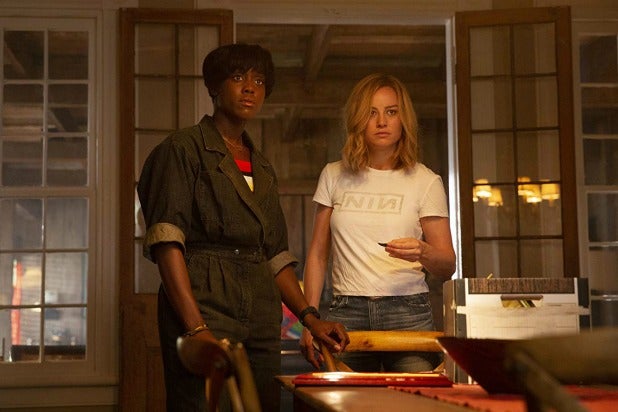 (This article contains only minor spoilers for “Captain Marvel”)

There are so many superheroes in the Marvel Cinematic Universe at this point, but the movies have barely scratched the surface of Marvel Comics’ pantheon of heroes. “Captain Marvel” introduces a whole new corner of the Marvel Universe with its focus on Carol Danvers (Brie Larson) and the Kree Empire’s war with the Skrulls, but it also gave us our first encounter with an Earth-based character who will someday become another cosmic hero.

The character in question is Monica Rambeau, created by Roger Stern and John Romita, Jr. in 1982. and in fact, becomes known as Captain Marvel for a time before Carol Danvers picked up that mantle.

In “Captain Marvel” we meet Monica as an 11 year old girl in 1995, when the film takes place. Her mother, Maria, is Carol’s best friend from back in the day who decides, at Monica’s urging, to help with the fight against Yon-Rogg (Jude Law) and the Kree StarForce. Monica plays a more minor role here, but we assume she’ll be taking on a more prominent role in the MCU, assuming they pay off this setup by having Monica grow up to be a superhero in “Captain Marvel” sequel set in the MCU’s present day.

Also Read: It's Super Weird that 'Captain Marvel' Doesn't Have Anything to Do With 'Avengers: Endgame'

Monica is on roughly the same level as Captain Marvel in terms of her powers. She the ability to transform into any form of energy within the electromagnetic spectrum, which would obviously have many destructive possibilities, and can also fly, fire energy blasts, phase through solid matter like Vision, and make herself invisible.

Monica gained her powers when a device capable of drawing energy from other dimensions exploded in her face, similar to the origins of the Carol Danvers’ Captain Marvel herself. But though Monica made her debut as the second Captain Marvel she’s actually adopted several Superhero aliases. In a 1996 storyline she started calling herself Photon; in 2006 she changed it Pulsar; and since 2010 she’s been best known as Spectrum. But yes, she still rocks an amazing black and white outfit.

“Captain Marvel” takes place in 1995, when Monica is still a child. But we know that Carol’s next appearance will be in the present day in “Avengers: Endgame.” So it’s logical to guess that an adult Monica would feature in whatever the second “Captain Marvel” movie ends up being.

Though I’d expect that the “Doctor Strange” sequel, which will likely hit theaters well before a hypothetical “Captain Marvel 2,” could also provide her origin, considering how preoccupied Strange is with dimensional energy. In the comics, however, Monica Rambeau made her debut in a Spider-Man story. So really anything is possible.

Whenever Photon shows up, it’ll be a big moment — she’ll likely be the most powerful person of color in the MCU at that point. A character who is so powerful that she would warrant her own movie, though a “Captain Marvel” sequel is the likely place for her to make her first big appearance. But without knowing much of anything firm about what Marvel has planned beyond “Avengers: Endgame,” it’s all just guesswork about when, if ever, Photon will take center stage.

But, hey, if they’re introducing Monica Rambeau here it’s gotta be because they at least have plans for her in the future.