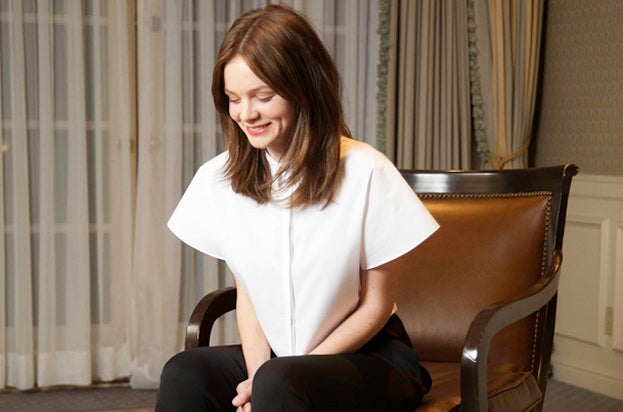 Carey Mulligan, star of "Inside Llewyn Davis," photographed by Remy Haynes for TheWrap

A version of this story appeared in OscarWrap: Nominations

She may have a certain girl-next-door appeal that has made her a hot property over the last four years, but Carey Mulligan shreds that image in her first few scenes of Joel and Ethan Coen’s “Inside Llewyn Davis.” As Jean, a Greenwich Village folkie, she drops F-bombs and S-bombs and spews vitriol over Oscar Isaac‘s ne’er-do-well Llewyn, whose child she may be carrying.

One scene, set in Washington Square Park, concludes with this delightfully blunt summation: “I should have had you wear double condoms. Well, we shouldn’t have done it in the first place. But if you ever do it again, which as a favor to women everywhere you should not, but if you do, you should be wearing condom on condom. And then wrap it in electrical tape. You should just walk around always inside a great big condom. Because you are shit. You should not be in contact with any living being. Being shit.”

Eight years after making her debut in “Pride & Prejudice,” four years after winning an Oscar nomination for “An Education” and seven months after appearing with Leonardo DiCaprio in Baz Luhrmann’s “The Great Gatsby,” Mulligan is relishing her small but delicious role in “Llewyn Davis.” She spoke to TheWrap a week after shooting ended on her starring role in Danish director Thomas Vinterberg’s adaptation of the Thomas Hardy novel “Far From the Madding Crowd.”

You sing very sweetly in “Inside Llewyn Davis,” but you also have that scorching scene where Jean lays into Llewyn in the park.
That was my audition scene, and it was one of the reasons I was desperate to do this movie. It’s so rare to see a female character where they’ve strung more than two sentences together. In most scripts, there’s nothing, no substance to so many female characters–the writing is just so thin. But this was dense and brilliantly written.

There was so much ranting and raving, and I thought it would be so much fun because I’d never gotten to do that onscreen or onstage. Jean was brutal, and we’re really meeting her at the worst point in her year and possibly in her life.

But does she protest too much? Is the attraction to Llewyn still there?
Definitely. What pains her more than anything is that he does know her better than anyone, and she does have a connection with him that she doesn’t have with Justin Timberlake‘s character, Jim. Her whole setup with Jim is very staged and convenient and not remotely where her heart is taking her.

The fact that Jean and Llewyn have this brutal relationship speaks to how close they are. And there are glimpses of them having a sort of warmth and affection for each other.

Also read: Why the Coen Brothers Wanted to Folk It Up on ‘Inside Llewyn Davis’

When you auditioned with that scene, did you feel good about it?
It was the most fun audition. I did it on tape when I was in L.A. for a week to promote “Shame,” and I pretty much did in the audition what I did on the day we shot. I just sort of got angrier and angrier and angrier. And the one I sent was definitively the most angry I could possibly be.

But I had no expectation of getting the role. None. It was a complete shock.

Why?
Being in a Coen brothers film feels elite. The kind of actors that get to be in their films, you just don’t imagine you’ll ever end up in that group.

What was the experience of being in that group like for you?
I was only there in New York for two weeks. But the days when I went in, you get a shot list, and it’s storyboarded. So you know you’ll be the third shot of the day, and they’ll shoot a mid shot, and that’s it. They don’t shoot coverage, they just shoot what they’re going to use.

I’ve never ever seen that before. I’ve never been in a movie where they haven’t shot every possible angle, unless they’ve run out of time. We had days where we finished at 4 o’clock in the afternoon and went home. That never happens. I guess that happens on Woody Allen films, but I’d never experienced that. I’ve always experienced shoots where you run over by an hour and the crew all hate you.

There’s something quite relaxing about knowing I’m not going to be on camera until then, and it’ll be this shot. I just love the way they work.

You sang “New York, New York” in “Shame,” and your husband Marcus Mumford is one of the producers of the “Llewyn Davis” soundtrack album. Did you feel comfortable with the musical side of the film?
No. I was nervous to be singing with [musical director] T Bone Burnett, and for Joel and Ethan. On the plane coming out to L.A. to do a week rehearsing the music, I’d seen “Inside the Actors Studio” with George Clooney, where he talked about singing for the Coens for “O Brother, Where Art Thou?” And he talked about this disastrous experience of singing for the first time and seeing their faces fall.

I was so hyper-aware of being in the studio and recording my thing and looking up and seeing Joel and Ethan, and they were just staring down at the floor. I was so scared.

And they’re not really known for giving lots of positive feedback.
Yeah, they’re not people who come up and slap you on the back. It’s much more chilled out than that. There’s no trumpets blaring when you’re filming with them. Ethan will sometimes come over and stare off into the distance and think for a second, standing right next to your head. Then he’ll start laughing at something he’s just thought of, and then he’ll give you a note, and you’ll try to work on that. Joel’s much more direct. He’ll come in and say, “Say this, don’t say that, try this…” But I always felt like, I’m being guided by them. I can do anything, and they’ll guide me in the right direction, rein me in if they need to and fix it if it’s wrong.

Also read: Carey Mulligan on Tattoos and the Nude Scene She Can’t Watch

Did they need to rein you in?
No, they pushed me to be nastier and scream louder and say more swear words. I was completely relaxed. I didn’t think about my accent, I didn’t think about anything.  It was so cathartic, especially coming off “Gatsby.” That was the only really big film that I’d ever done, and I wasn’t used to working in that way. It was also the only film where I’ve played a character who’s meant to be pretty. So that was sort of a bizarre stress and something that I had to think about in a visual way. It was kind of weird for me.

So to come off that film and just put on a big black dark wig, no makeup and just sort of march around was great. It was like stomping around in the mud after being in a pretty dress, which was exactly what I wanted to do.

Could you have fun shooting the scene where you sing “500 Miles” with Justin Timberlake and Stark Sands?
Well, that was the first scene we shot. And it was recorded live, and I wasn’t expecting it to be. I thought it would be playback. And I wasn’t meant to sing on my own. We were just about to shoot it, and Joel came over to me said, “You should sing those two lines on your own, because it tells that story better when you look at Oscar.”

And I said, “What? On my own? That wasn’t part of the deal. I wasn’t meant to sing on my own.” [laughs] T Bone had to come and sort of talk me off the ledge.

But “500 Miles” always has a female voice – on the Peter, Paul and Mary version, Mary sings lead.
I know. I think they probably always knew I was going to sing alone, but they just didn’t tell me so I didn’t build it up into some terrible nightmare. They just sprung it at the last minute.

You’d worked with Oscar Isaac on “Drive,” but did you know he was also a musician?
I remembered when we were filming “Drive” that he was doing gigs of his own music, but I never got to see them, because we were working. So I knew that he played, but I didn’t know what kind of music, and I had no idea what his voice was like.

So that week of rehearsal in the studio, when he picked up a guitar and started singing for the first time, I was like, “What? You’re so good, and that’s so annoying!”

And then the first day I filmed, when I showed up to do the “500 Miles” scene, he was doing the “Hang Me” scene right before. So I watched him filming that, which was so amazing.

You talked about this movie being a stomp in the mud after wearing pretty dresses in “Gatsby.” But after “Llewyn Davis,” you went back to dresses for your first period drama in many years.
There were no costume dramas the last couple of years that I felt drawn to doing, and to a degree I was probably a bit wary of them. When I first started getting interesting meetings from An Education, I didn’t want to be the British actress who wears a corset and does costume dramas. That’s why I did lots of stuff in America. But when Far From the Madding Crowd came along, I loved the book and her story, and I loved Thomas’ films so much. So it just seemed like the right thing to do.

Of course, I hadn’t played a leading role in a film since Never Let Me Go, which was four years ago. I’d forgotten how hard it was.