Carl Icahn on Tuesday made his most aggressive play to strengthen his grip on Lionsgate (NYSE: LGF), tendering an offer for more than 13 million shares, an amount that could make him the largest stakeholder in the studio.

In combination with his existing 19 percent stake, the additional shares would give Icahn 29.9 percent of the mid-major, which has been fending off the corporate raider for months. 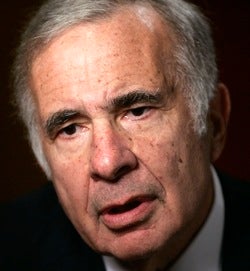 But before Icahn can bully his way in once and for all, he’ll have to clear some hurdles.

If the bid — worth as much as $79 million — is successful, it would trigger a change-of-control default in the company’s revolving credit, allowing its lender to demand accelerated repayment and straining the already maxed-out studio. Icahn asserted in a statement that the default could be avoided if the lenders chose to waive it, or through pre-payment of debt.

But the situation could also block the studio from buying MGM or Miramax, moves Icahn doesn’t want to see happen right now (he’s accused current management of overspending on purchases like TV Guide for $255 million, and for its cushy operating costs of $125 million a year).

What’s more, the offer includes a provision to stop Lionsgate from making any acquisition in excess of $100 million as long as it stands, which also ties Lionsgate’s hands for the moment.

The surprise offer was for $6 per share — about a 14 percent premium over the independent film and TV studio’s Monday closing stock price of $5.23. Lionsgate said in a statement that its board would "review Mr. Icahn’s proposal and will make its recommendation to shareholders promptly."

Icahn, who has been vocally critical of Lionsgate’s executive leadership, has been slowly building his stake since 2008, and has met plenty of resistance along the way. Last summer, the company turned down his request for two seats on the board. Icahn wanted to install his own mebers, including his son, Brett, but  top executives Jon Feltheimer and Michael Burns would only cooperate if Icahn promised to stop upping his stake — a condition he refused.

Icahn first began what looked like a prelude to a takeover bid back in April, tendering an offer to buy $325 million in debt from Lionsgate bondholders, which was summarily rejected. That was in response to the collapse of talks between Lionsgate top executives and Icahn, who wanted two board seats but didn’t get them.
And all of this after a a lost proxy battle to remove Yahoo’s board of directors and a failed lawsuit against Motorola to force a sale of its mobile business.
Lionsgate did not immediately respond to interview requests from TheWrap, but their release is below …
LIONSGATE CONFIRMS RECEIPT OF UNSOLICITED
TENDER OFFER FROM CARL ICAHN
SANTA MONICA, CA, and VANCOUVER, BC, February 16, 2010 — Lionsgate (NYSE: LGF), today announced that it has received an unsolicited tender offer from Carl Icahn to acquire up to 13,164,420 common shares of Lionsgate which, together with the common shares he already owns, would constitute approximately 29.9% of the outstanding common shares of Lionsgate. The purchase price will be USD $6.00 per share in cash.
Consistent with its fiduciary duties and in consultation with its financial and legal advisors, Lionsgate’s Board of Directors will review Mr. Icahn’s proposal and will make its recommendation to shareholders promptly. Lionsgate noted that there is no need for shareholders to take any action at this time.
Morgan Stanley is serving as financial advisor to Lionsgate and Wachtell, Lipton, Rosen & Katz is serving as legal advisor.
Lionsgate will file a Solicitation/Recommendation Statement on Schedule 14D-9 in the event that Icahn and/or affiliates of Icahn commence a tender offer for outstanding shares of Lionsgate.  Lionsgate shareholders are strongly encouraged to read any Solicitation/Recommendation Statement when it becomes available, as it will contain important information.  Shareholders will be able to obtain any Solicitation/Recommendation Statement, any amendments or supplements thereto and other documents filed by Lionsgate with the SEC for no charge at the SEC’s website at www.sec.gov.  Copies will also be available at no charge at Lionsgate’s website at www.lionsgate.com or by writing to Lionsgate at 2700 Colorado Avenue, Suite 200, Santa Monica, California 90404.
About Lionsgate
Lionsgate (NYSE: LGF) is the leading next generation studio with a strong and diversified presence in the production and distribution of motion pictures, television programming, home entertainment, family entertainment, video-on-demand and digitally delivered content. The Company has built a strong television presence in production of prime time cable and broadcast network series, distribution and syndication of programming through Debmar-Mercury and an array of channel assets. Lionsgate currently has nearly 20 shows on 10 different networks spanning its prime time production, distribution and syndication businesses, including such critically-acclaimed hits as "Mad Men", "Weeds" and "Nurse Jackie" along with new series such as "Blue Mountain State" and the syndication successes "Tyler Perry’s House Of Payne", its spinoff "Meet The Browns" and "The Wendy Williams Show". Its feature film business has generated more than $400 million at the North American box office in the past year, including the recent critically-acclaimed hit PRECIOUS, which has garnered nearly $50 million at the North American box office and earned six Academy Award (R) nominations, including Best Picture. The Company’s home entertainment business has grown to more than 7% market share and is an industry leader in box office-to-DVD revenue conversion rate. Lionsgate handles a prestigious and prolific library of approximately 12,000 motion picture and television titles that is an important source of recurring revenue and serves as the foundation for the growth of the Company’s core businesses. The Lionsgate brand remains synonymous with original, daring, quality entertainment in markets around the world.
x
Looks like you're enjoying reading