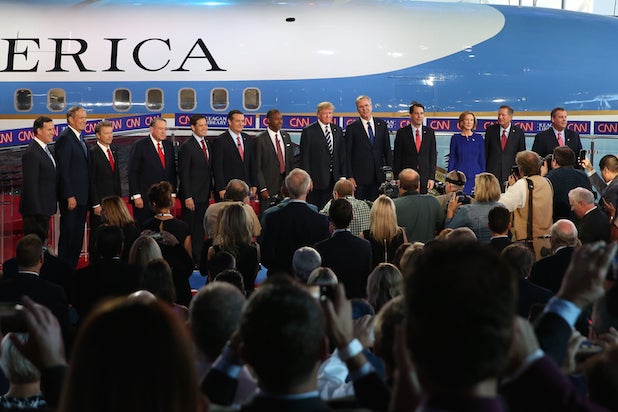 Why waste all those frequent-flier miles?

Republican presidential candidates are hitting up Hollywood for cash on Thursday, extending their California visits following the CNN debate on Wednesday to raise funds and schmooze with local politicians before getting back on the campaign trail.

The star of the debate, former Hewlett-Packard CEO Carly Fiorina, has a fundraiser on Thursday evening in Los Angeles. Her donors include Univision chairman Jerry Perenchio, who is responsible for nearly half of the money that her super-PAC has raised and who, according to Forbes, is worth an eye-popping $2.7 billion.

As the Wrap reported earlier, Kentucky Sen. Rand Paul appeared at a fundraiser for the San Bernardino County Republican Party on Tuesday.

Former Arkansas Governor Mike Huckabee will be hitting up a California Republican Party convention luncheon in Anaheim on Friday.

And Wisconsin Governor Scott Walker was scheduled to attend a fundraiser for Rep. Ed Royce of California’s 39th district at Knott’s Berry Farm in Buena Park on Saturday. But after recently canceling his appearance at the party convention, it’s not clear whether he’ll still show up.